The proposal, named Close to Home, is designed by Royal Danish Academy of Fine Arts (KADK) graduate Clarke to offer an alternative to the country's typical mental health clinics that he describes as "large, centralised and inhumane".

Based in a district in central Beijing, the project sees a number of small mental wellness clinics nestled in and around existing hutongs – tightly packed neighbourhoods that are typical in the city – and larger public buildings.

Clarke believes that the integration of these clinics would make healthcare more accessible to locals.

"Through discussions with local academics and mental healthcare workers I have seen how China's mental health infrastructure has been left long behind developments in the rest of the economy, leaving millions of suffers without care," Clarke told Dezeen.

"This project comprises of a number of small scale architectural and spatial interventions across the city, which each respond to specific opportunities found within the existing city fabric, and each with specific psychological benefits," he continued.

"By bringing treatment closer to home, the hope is that more in the local communities will engage with their and their loved ones mental health."

Close to Home is the culmination of two years of research carried out by Clarke on the Urbanism and Societal Change programme at KADK.

His proposal responds to the Chinese government's 2015-2020 Mental Healthcare Working Plan – a scheme that is inviting prototypes for health care infrastructure that could help deliver mental health care at district scale. 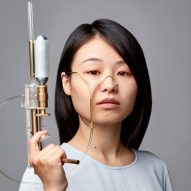 He designed the scheme in Xicheng, one of Beijing's oldest districts, which was chosen for its mismatch of towering apartment blocks to labyrinths of small traditional hutongs. The proposed mental health facilities "each respond to specific opportunities found within this existing city fabric".

At ground level, Close to Home proposes a network of urban mental wellness clinics that are accessible for the whole community.

These would host a variety of treatment and recovery programmes, replacing those in the institutional psychiatric hospitals on the outskirts of the city.

In contrast to the existing, institutional healthcare facilities, these buildings are all imagined to be built with lightweight materials including timber and polycarbonate.

This ensures the buildings can be easily fabricated and later modified, while complementing the existing "subtlety and lightness to much of the vernacular architecture that can be found in Beijing's hutongs".

Close to Home also sees the transformation of an abundance of unused flat roof space, particularly those of the apartment blocks, used as a space for sky gardens.

"There is a large body of research showing the link between prescribed gardening activities for patients and positive mental health outcomes," explained Clarke.

"Thus, a number of interventions look to create a network of rooftop therapeutic gardens, located on rooftop spaces away from the noise and pollution of the city below."

Close to Home would be complete with a digital layer, which makes use of China's super apps like WeChat. It is hoped by integrating healthcare with these apps, which "facilitate almost the entirety of many people's digital lives", mental health care will be more accessible.

"These products are growing rapidly and are reaching large numbers, however to be most effective for treatment I believe that there will always be a need for physical personal interaction, and thus require an interaction of the digital with physical space," concluded Clarke.

Clarke is now developing the Close to Home further in collaboration with academic researchers, architects and digital interaction designers in Beijing after being awarded a UN scholarship for the proposal – an endowment given to graduating projects perceived to best target the UN Sustainable Development Goals.