Two dilapidated sheds built in 1961 on the shingle beach of Dungeness in Kent have been replaced with a cosy holiday home by London studios MS-DA and Johnson Naylor.

The corrugated metal structure with its interlocking pitched roofs replaces a pair of sheds that were built in the 1960s to test radar equipment. The project brief was to create a home for two that maintained a link with the building's original history.

Based on the form of the original sheds rotated through 90 degrees, the new prefabricated structure forms a 7.5-square-metre holiday home.

The design, which has been shortlisted for a Dezeen Award in the Hotel and short stay interior category, features an industrial corrugated zinc sheet exterior and a light and calm interior with pale wood panelling and large windows that frame the surrounding shingle landscape.

"The interior by contrast we wanted to be more gentle, natural and calm – a sanctuary."

The white stained roof is part of the prefabricated timber structure that was made in Switzerland. The stain was applied prior to shipping. The vertical walls are either a pale bone-white stained oak or a soft purple-grey.

"Bone and purple are part of the landscape of Dungeness – indigenous flowers tend to be either yellow or purple like Viper’s Bugloss or Yellowhorn Poppy and bone is one of the shingle colours," said Naylor, who worked with the founder of design studio MS-DA, Michel Schranz, on the holiday home.

"On a beautiful calm sunny day the interior reflects the natural landscape in texture and colour," Naylor continued.

"Then imagine curling up on the sofa watching a Force 8 storm blow through Dungeness - tumultuous sky, horizontal rain and the building wrapping itself around you like a soft, snug blanket."

The home's layout is effectively made up of four separate zones. One shed on the seaward side is the living/dining space. 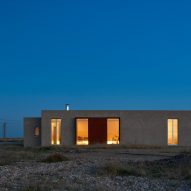 The second shed on the north side has a raised sleeping area and en-suite bathroom/sauna that can be divided by a felt curtain. In addition, there is also an entrance hall with a coat store and a separate shower room.

The sheds form part of a line of industrial buildings that sit on the foreshore in Dungeness - the lighthouse, radar, fog signal and coastguard lookout, all of which sit in contrast to the domestic buildings that are typically found in the protected landscape.

These buildings are mostly wrapped around old railway carriages salvaged in the late 18th and early 19th century.

Planning for the holiday home was granted in summer 2017 by committee and construction started in January 2018. The project was completed in January of this year.

The original sheds were owned by a record label called Decca that branched into different enterprises such as developing radar equipment. The radar division was started in 1949 and survived through several changes of hands of the company between 1979 and 2004, when the name finally disappeared.

The two sheds were used by Decca to test new radar equipment. Several platforms and support structures were added over the years but in the past 30 years everything fell into disrepair and the structures became entirely dilapidated.

The only elements of the original building that remain now are the concrete posts that once supported a chain link fence that marked its perimeter, and the oak sleepers that served as the foundation for the timber sheds.

Approximately 70 per cent of the sleepers were re-used to create a path from the road to the building across the shingle beach. Several pieces of equipment from inside the sheds and the manufacturer's plaque were also saved.

"Having completed five projects in Dungeness as separate entities, Radar is a culmination of our experience, passion and for the area."

Previous projects completed by the firm in Dungeness include the redesign of a former bomb-proof fuel pumping station into a holiday home.

"Drawing aspects from each of of projects so far, we were able to create a space that we had full control over, whilst allowing the previous structure to inform our design both materially and historically," said the studio.

"The transition between the original form and the current form of the building, aimed to be seamless. Radar sits discreetly in the landscape echoing both the buildings past and our own past relationship with such a unique place."

As well as the nuclear power station, Dungeness's unusual shingle beach landscape is home to a variety of converted fisherman's shacks by award-winning architects. Most recently, artist Joe Sweeney has installed an interactive public artwork called +44 that invites people to share their feelings about Brexit in a phone box.

Photography is by Billy Bolton.