Toronto practice Building Arts Architects used a small watercraft and boats to transport prefabricated elements to build this boathouse on a site only accessible by water in Ontario.

Building Arts Architects designed the boathouse on Kawagama Lake, which is about a three hours drive north of Canadian city Toronto. Because of this remote setting, the studio designed the structure so it could be assembled offsite and then transported.

The boathouse comprises a steel and glass construction that was built off-site over the winter, and then quickly erected in warmer months once the snow had melted. In total, it took two years to build and was constructed only over weekends in between the months of May and October, when weather permitted.

"The project was constructed by hand and brought to the site by small watercraft and barges," said Jason Smirnis, who co-founded the studio with David Jensen.

"We designed the structure such that all connections where bolted and that could be lifted and erected by hand with only two people."

A footbridge bridge leads to the upper glazed level of the boathouse, which perches on a hilly, forested plot.

Encasing its steel supports is Douglas fir. The two materials were chosen for their aesthetics, as well as their durability and performance in the freezing and thawing conditions typical to the area.

The lower level of the boathouse is clad in salvaged wood siding, leftover from a former boathouse on the site that had fallen into disrepair.

"We reused as much of the lumber from the existing structure as possible, due to the challenges of bringing and removing materials from the site," Smirnis said.

The use of additional Douglas fir, particularly inside the boathouse, also pays homage to its "ubiquitous heritage in Ontario cottage country," he said.

All of the millwork and facetted Douglas fir siding was made in the studio's woodshop in Toronto.

A solid white oak-and-glass front door provides access to the upper floor, while steps outside lead down to the enclosed boat storage that houses a fishing boat, canoes and kayaks. Also located on the lower level is a patio, outdoor fireplace and dock. 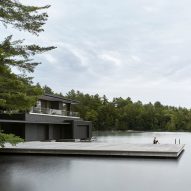 A sitting area is complete with a woodburning fireplace, as four chairs are arranged in a circle around a tree root coffee table.

"The dwelling features are very basic and the intent was to create a space which heightens the experience of living on the water through siting, view, sound and smell," said Building Arts Architects.

A half-wall with storage separates the sitting area from two queen beds with red blankets. Bookshelves, sliding closets, and shelves for towels are incorporated into the built-in. A white, retro refrigerator is also included upstairs.

Lining the floors are dark grey tiles of a hard natural stone, called Bluestone. Three walls in the bedroom area are clad in Douglas fir for privacy, as well as the ceiling, which gives a warm, golden tone to the space. Black steel beams also feature overhead.

The boathouse doesn't have a bathroom and shower, as local zoning bylaws did not permit plumbing facilities so close to the lake. Instead, there is an outdoor faucet mounted on a granite slab near the front entrance.

A larger, main cottage is about 300 feet (91 metres) away, and the boathouse is designed as an overflow cabin.

Other private boathouses have been designed in Canada with blackened wood, including one in Muskoka, Ontario by Akb Architects and a boxy volume by in Quebec by Mu Architecture.

The lakes around Austin, Texas are also popular for boathouses, with others being an open-air design by Andersson-Wise Architects and a cylindrical building with a waterfall by Bercy Chen Studio.

Photography is by David Whittaker.