The Knowledge Innovation Centre will contain a 60,000-square-metre business and technology park, with eighty per cent of its structure positioned underground.

It is designed by local studio MDDM as a backdrop that "respects and preserves" Niemeyer's neo-futurist fairground, which is one of the 20th-century's most notable pieces of abandoned architecture.

"MDDM opted for an architecture that is fully embedded and integrated underground. This approach creates no conflict with Oscar Niemeyer's volumes, utilises less visual concrete and more green spaces, and is more energy efficient," explained the studio.

"Although we did not end up opting for a landmark building, the overall project in itself is one."

The 100-hectare Rachid Karame International Fair was designed in the early 1960s by Niemeyer as Lebanon's international exhibition site, however construction was abandoned at the outbreak of the Lebanese civil war and never restarted.

It is famed for its 15 concrete structures – including a domed theatre, an arch and a long boomerang-shaped canopy – that are all complete in Niemeyer's signature neo-futurist style for which he became a key figure in modernism. 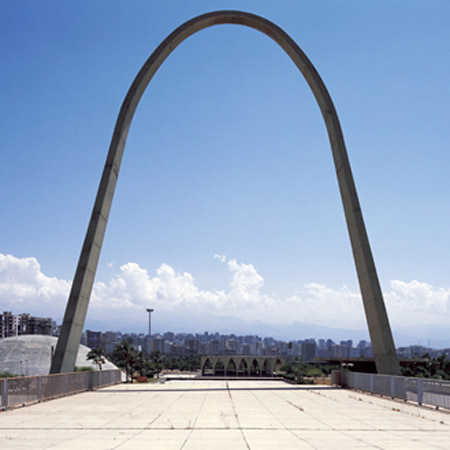 In a bid to prevent the rumoured demolition of the complex, the city has transformed an undeveloped area on the site into the a high-technology hub, the Tripoli Special Economic Zone, to help boost it's economy.

MDDM's design is the winning entry of an international competition that invited architects to create a business park for the hub that would complement Niemeyer's designs.

The studio's Knowledge Innovation Centre proposal is intended to "preserve site language" and "blend in" with Niemeyer's modernist architecture. This is achieved by positioning the majority of the building below ground.

What will be visible from ground level will be distinguished by a series of long, linear forms that are positioned in line with the Grand Canopy – the 717-metre-long boomerang-shaped structure.

Interspersed between the linear structures will be a series of sunken, square courtyards, which are wrapped by floor-to-ceiling glazing and offer glimpses into the building from ground level.

These are also designed to evoke the feeling of being above ground when inside.

"The landscape approach with an underground intervention that we think, meets all the requirements functionally and conceptually," added the studio.

"In addition, this option enabled us to have 70 per cent of Knowledge Innovation Centre site green."

Inside, the business park will mainly host a mix of apartments, offices and common spaces. It will have a modular structure to ensure they are highly adaptable.

This modular form is also intended to ensure the Knowledge Innovation Centre's development across the site is consistent, creating "a balanced structure that withstands time, at any stage construction works are stopped."

Elsewhere in Lebanon, Blankpage Architects recently completed a concrete church to complement an 18th-century chapel, WORKac is developing the Beirut Museum of Art and Kieran Donnellan has built a tiny clifftop chapel by the 12th-century Byblos Castle.