Architect Andrew Bromberg at Aedas has revealed the design for an extension to the home of Edmonton Symphony Orchestra in Canada, featuring rounded glass walls, a slatted stone roof and an elevated garden.

Andrew Bromberg at international architecture firm Aedas designed the renovation for the home of the orchestra called Winspear Centre for Music, located in downtown Edmonton.

The project will add a 30-metre high addition to house amenities and new spaces next to the existing cultural hub, which was built in 1997.

Bromberg's design will measure 4,500 square metres and comprise three storeys complete with underground parking. It will feature a rectangular base and a glazed, square portion on top that meets with an elevated garden.

A slatted roof will project outwards from the glass-enclosed main atrium, which features operable glass walls that open to the elevated gardens. The roof's overhang will be used to shade the garden and naturally cool the foyer inside.

Another portion of the roof extends down to street level.

The building will expand Edmonton's music offerings to include a new, 550-seat music venue called the "Music Box". The theatre will be on the second floor, and comprise a dark room with automated retractable seating.

A childcare centre, music library and additional rooms for the concert hall, along with parking, will also be located at ground level.

Access to the existing Winspear building, which includes a 1,932-seater music hall, will be provided via a pathway on the first floor of the new structure. Areas for coat check, a bar, restrooms, lockers and offices for administration will also be located on this level.

Bromberg designed the Winspear Project to make the most of local materials. The roof will be made from local stone, while walls inside the theatre will be constructed with local timber.

Pale pillars will fill the airy atrium, as well as an elevated walkway that leads to the "Music Box". Renderings white walls and curvilinear floors that are a combination of pale stone and wood.

Canada's government has contributed $48.6 million CAD (£29.9 million) to the project, while several million dollars are expected to be fundraised to meet the proposed cost of $65.5-million CAD (£39.9 million). 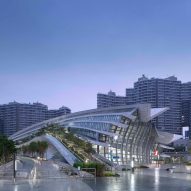 The building is expected to complete in 2022, as part the 25th anniversary of Edmonton's Winspear Centre for Music.

Bromberg designed the project on behalf of Aedas, one of the world's largest architecture practices. The firm has designed several projects in China, including a skyscraper in Shanghai and an apartment building in Hong Kong.

In 2014, Aedas split its business into two to focus on "high-rise, high-density" projects, with its 13 offices in Asia, the US and Middle East under the Aedas brand, while its outposts in the UK, Russia, Poland and Kazakhstan relaunched under AHR.

Other projects by Bromberg at Aedas are a jagged, plant-covered train station in Hong Kong, a Beijing shopping centre designed to be topped with fake snow, Singapore's performing arts centre The Star and Nanfung complex in Guangzhou, China.

Renderings are by Asymmetric A unless stated otherwise.