Architecture studio Bureau de Change has covered a Cotswolds house formed of a pair of interlocking barn-style buildings in stone and larch, which has been charred for a graduated effect.

Long House is comprised of two parallel volumes that appear pushed together so they overlap, merging internally to create a large living space overlooking a patio.

The chicken sheds used to occupy the site where the house now stands.

Both barns have been lent a distinctive character by their contrasting finishes, chosen to blend in with the surrounding landscape of the English countryside.

The materials are complimentary but contrasting – one heavier and with fewer openings, the other lighter and more open.

"The front barn has been built in dry stone wall by a local craftsman, chosen not only for its local relevance but also for its mass and muscularity," said  Mavropoulos. "This facade is monolithic, with fewer openings to produce a heavier, solid volume at the front," he added.

"As a counterpoint, the taller barn at the back is clad in a lighter-weight natural larch which has been charred to a deep leathery black at each window recess."

These charred black strips  blend into the facade with ombré-effect edges, running the full height of Long House. The darker areas frame windows at both the ground and first floor levels.

Inside, simple white interiors frame views of both the patio and the surrounding countryside.

The two barns are loosely divided around their functions, and a small annexe sits alongside the main house. 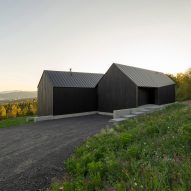 Facing the road, single-storey stone volume houses a bedroom and studio for the artist who owns the house, giving greater privacy at a slight remove from the centre of the home.

To the south, a two-storey, wood-clad volume is occupied by a large living, dining and kitchen area at ground floor with bedrooms and bathroom above.

Where the two meet, a large cut into the lower barn was made to create space for the patio space with a tree planted at the centre. This terrace also cuts slightly into the taller barn, and is lined internally with copper.

The practice has recently completed several other projects in its home city of London, including a concrete extension to a home in Clapham and a mixed-use building in Fitzrovia with a "twisting" brick facade.