People are invited to climb the curved, plant-covered roof of the new train station in West Kowloon, Hong Kong, designed by Andrew Bromberg at Aedas.

West Kowloon Station officially opened in September 2018. It is the new terminus of the 88-mile-long Guangzhou-Shenzhen-Hong Kong high-speed rail service (XRL), which connects to the National network all the way to Beijing, a 1,200 mile journey away.

Andrew Bromberg at Aedas won the competition to design the station held by the MTR Company. It forms part of the West Kowloon Cultural District, a new arts district being built on reclaimed land on the city's waterfront.

Drone footage shows trees, shrubs and other greenery planted in beds along parts of the station's rooftop, which has stairways leading up to a plaza with views over Victoria Harbour.

At its highest point, the terminus is 25 metres. And, as most of the railway lines end underground, the station building also extends 25 metres below ground at its deepest point.

The international train station is closer to an airport in scale, processing passengers through 400,000 square metres of floor space.

Immigration service areas for those crossing the border between Hong Kong are stacked around the 180-metre-long central void. 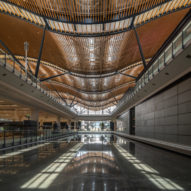 Visitors enter this cavernous internal space as they arrive at the station, where a glazed south-facing facade frames views of Hong Kong's skyscrapers and The Peak.

The curtain walls in the building are formed from 4,000 glass panels. Bending white columns support the arching roof.

The large amounts of glazing were designed to allow natural light to penetrate to the below ground levels and provide views that ground the station in its location.

"I have been working on this station for nearly 10 years and it's great to see it now teeming with people," said architect Andrew Bromberg, global design principal at Aedas.

"The new station is an opportunity for all people to discover new connections to the city of Hong Kong."

The West Kowloon Cultural District has been in development for more than a decade, to a masterplan by Foster + Partners.

UNStudio has recently unveiled designs for a theatre complex there, while the Herzog & de Meuron M+ museum is nearing completion.

West Kowloon Station is located next to the West Kowloon bus station. Seven pedestrian bridges and two subways were built to access the station.

The green roof and the parks created around the building offer over seven acres of green space to a densely packed part of the city.

Photography is by Paul Warchol unless otherwise stated.