Italian studio Carlo Ratti Associati has developed an orange juice bar that turns the waste fruit peel into 3D-printed bioplastic cups to drink the contents from, as an example of the circular economy in practice.

Created for global energy company Eni, Feel the Peel is a prototype orange-squeezing machine that aims to bring circular design into everyday life.

The 3.10-metre-tall experimental juice bar is topped by a circular dome filled with 1,500 oranges. When someone orders a juice, the oranges slide down into the squeezer where they are cut in half and juiced.

After being juiced, the leftover orange peel falls into a see-through compartment at the bottom of the machine. The collected rinds are then dried and milled to make "orange dust", which is mixed with polylactic acid (PLA) to form a bioplastic material. 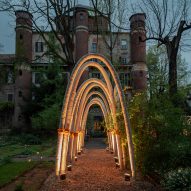 This material is then heated and melted to form a filament, which is fed through a 3D printer incorporated into the machine.

Visitors can watch the printing process as it builds up concentric layers of the filament, before using the finished product to drink the freshly-squeezed juice.

The cup can then be recycled after use, with the material continually broken down and remade into further cups in theory.

The move to a circular economy – which involves designing out waste and pollution from the production and consumption process, and regenerating natural systems – is being encouraged by the Ellen MacArthur Foundation and others.

Last month, MacArthur launched an initiative to persuade 20 million designers to shift from linear to circular principles in their work.

"The principle of circularity is a must for today's objects," said founder Carlo Ratti. "Working with Eni, we tried to show circularity in a very tangible way, by developing a machine that helps us to understand how oranges can be used well beyond their juice."

According to Ratti, the next iterations of Feel the Peel might include new functions, such as printing fabric for clothing from orange peel.

The Circular Juice Bar will be installed at the Singularity University Summit in Milan from 8 to 9 October 2019, before touring around Italy in the following months in a bid to "demonstrate a new approach to environmental circularity in daily life".

Feel the Peel is not the first collaboration between Carlo Ratti Associati and Eni that explores circular design. The pair previously teamed up to present a series of arched architectural structures made from mushroom mycelium at Milan Design Week 2019.

Grown from a fungus material, the structures were shredded and returned to the soil as compost after the design festival, in a fully circular fashion.