The proposal will see the European Parliament building renovated in an effort to reduce the carbon emissions that would be generated by demolishing the existing building and constructing a new one.

"The current Spaak building has numerous shortcomings," said Europarc. "However, demolishing it and replacing it with a new 'palace' might be the wrong approach."

"In the building sector, over 50 per cent of the carbon footprint generated happens in constructing the raw structure of a building. If fully dismantled, all that expense is lost and needs to be spent again in a new construction. Here, the strategy should be to rigorously re-use most of the Spaak structure, its carbon expense."

The collective will be supported by engineering companies including UTIL and Ramboll.

Renders of the proposal show the postmodern Paul-Henri Spaak Building, which was designed in 1988 by Michel Boucquillon and Atelier Espace Léopold, without its signature arched vault and surrounded by a white-latticed framework that extends above the roof line and encloses a rooftop garden.

Europarc has created a permeable design with a public passage that will lead visitors through the parliamentary building via an open-air entrance, and be connected to Brussels' inner-city pedestrian network.

The collective will remove an existing wall-like facade at the adjoining Spinelli building to better welcome the public to the site and frame views of the pill-shaped Paul Henri Spaak building, which is named after a Belgian politician. 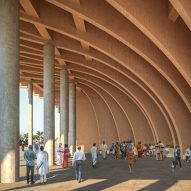 The new design will open up the site and strengthen the pedestrian routes and connections to the adjacent Place du Luxembourg and Parc Léopold, according to Europarc.

"The building should not be impenetrable but should be a place of openness. Therefore, a public passage could be created through the Parliament," said Europarc.

"In a natural and intuitive way, the passage will provide a grand entrance to visitors of the Parliament and establish an actual node in the pedestrian network of Brussels."

The Hemicycle, a new chamber for the European Parliament, will be located on the upper levels of the building. It will be redesigned to integrate more modern amenities that include a number of digital features to broaden external and non-physical connections.

Floor-to-ceiling windows will connect the interior of the Hemicycle with a rooftop garden that will provide views across the city. These will also double as large screens during conferences and meetings.

The building will be topped with the Green Agora, a botanical garden that references ancient Grecian agoras or gathering spaces. The botanical garden will be visually connected to the below Hemicycle through an open ceiling.

Elsewhere, Kéré Architecture designed the National Assembly of Benin, which is set to be built in the capital of Porto-Novo and features a top-heavy form that aims to mimic tree canopies.

In Vienna, Malka Architecture revealed its plans to top the French embassy with art-nouveau-style light wells.

The renders are courtesy of Europarc.