Dark surfaces and an array of warm materials helped Studio Four create a cosy series of rooms behind the black facade of this Melbourne family home.

Central Park Road Residence is situated in the suburb of Malvern and has been designed to appear as "the definition of hygge" – a Danish term used to describe feelings of cosiness, comfort and general contentment.

Melbourne-based Studio Four decided to reference the concept after finding out that the home's owners, a couple with three young children, have Danish roots.

"Before this project began, our understanding of hygge was quite limited and perhaps cliché," the studio's co-director, Annabelle Berryman, told Dezeen.

"During the design process, our understanding of hygge was deepened and informed by our clients. We were taught that it was not necessarily an aesthetic, but it was a feeling that was generated by context and at its core was a celebration of warmth, happiness and togetherness," she continued.

"The spirit of hygge is really about being inspired to make quality time for friends and family, but also being motivated to be by yourself and possess a certain slowness and the ability to just be present."

To begin, the studio painted the property's original brown-brick facade a shade of charcoal black to give the home a greater sense of depth and shadow.

"Our aim was always for the architecture to bleed inside to inform the interiors – it is difficult to remember if there was ever a moment when the vision for this house was not dark," explained Berryman. 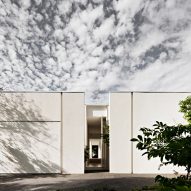 "[The colour] allows the body of the house to play on its existing strength, possess a moody drama, but at the same time recede into the background," she continued.

Part of the roof has also been extended to form an oversized eave above the front door.

Dark brick surfaces continue inside, where the studio has refreshed the home's formerly "uninspired and stagnant" rooms.

The living area is now anchored by a huge new fireplace that's topped with a five-metre-high steel flue, where inhabitants can gather during the cold winter months.

Other cosy, tactile decor details in the space include a couple of tan-leather armchairs, chunky timber side-tables and a woven floor rug. A copper iteration of Louis Poulsen's signature PH Artichoke pendant lamp has also been suspended at the centre.

The home's plasterboard ceiling has been largely re-lined with oak battens – a design feature informed by the aesthetic of Michelin-starred Copenhagen restaurant Noma, which Berryman visited prior to the project.

"[Noma] had just opened and it demonstrated a perfect balance of hygge. Its beautiful exposed ceiling structure certainly demonstrated the value and warmth a timber ceiling can provide," said Berryman.

The studio has largely maintained the home's open layout, punctuating a series of new windows to better connect rooms to the greenery-filled garden and pool area outdoors.

Only a couple of partitions have been erected to form more enclosed living spaces: a floor-to-ceiling black volume with integrated cupboards conceals the kitchen, which is centred by a wooden breakfast island.

Another full-height storage volume doubles up as a headboard in the master bedroom suite.

"[The brief's] clarity led us to compile spaces that would lead to many different levels and intensities of intimacy, from the perhaps sometimes huge family celebrations, to the more intimate times of contemplation when the house needed to provide sanctuary from the hectic world outside," added Berryman.

Studio Four is headed up by Annabelle Berryman and Sarah Henry.

Central Park Road is one of several residential projects that it has completed in Melbourne, joining an all-white house in the city's Glen Iris suburb that's centred around a garden, and another in the Mornington Peninsula area which is clad entirely in blackened wood.

It isn't the only studio to be inspired by hygge. Last year Norm Architects referenced the Scandi lifestyle concept when completing the interiors of a family home in Oslo, which features a series of cosy nooks, mottled grey walls and earth-toned textiles.