Having specialised in CGI and 3D graphics, Tom Dutfield joined design studio ECE Architecture as its first in-house visualiser. He describes his career progression for the Dezeen Jobs careers guide.

His long-term responsibilities include providing insight on how to improve the quality of work, both through research and development, and through the use of emerging technologies.

Dutfield's interest in 3D graphics was sparked while he was studying creative digital media for his undergraduate degree. He credits the subject range for giving him "a chance to explore many different subject matters, from contextual studies and fine art, to computer programming and game design".

It was after completing his dissertation, which comprised a flythrough of a house created using 3D-modelling and animation, that he realised architectural visualisation was his calling.

"The whole process was extremely exciting and seeing the end-product had me sold on a career in architectural visualisation," he said. "There was no looking back from that point." 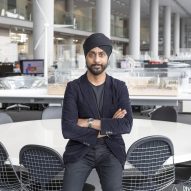 Careers guide: Narinder Sagoo explains how he came to oversee the visual output of Foster + Partners

He began his career freelancing for architectural illustration firm Retina Images, after which he continued to work at companies that specialised in CGI and rendering.

Having mastered his visualisation skills, Dutfield wanted to embark on a new challenge, which led him to explore working at an architecture firm, rather than a visualisation studio.

"For the large part of my career I've spent creating an end-product, mostly for marketing, which means working from a finished design," he explained. "With ECE, I often have the chance to work on various stages of the design."

The opportunity to be involved in the design process ultimately led to Dutfield becoming part of the firm.

"Prior to my joining, ECE had not had an in-house visualiser before, so it was a chance to put my mark on what I was doing," he said.

Dutfield has since worked on a number of architectural projects, including the Sussex County Cricket masterplan, which comprises residential, commercial and leisure spaces.

"It's been great to illustrate the design and see it evolve, and be a part of the process at different stages," he said.

Dutfield described the "quest for inspiration" as what has helped him stay motivated throughout his career: "You know it's going to come eventually, but it's the excitement and anticipation of not knowing where or when."