The campaign features 52 rugs, created by an international cast of 12 designers that have collaborated with the brand, as well as those by their own design studio.

The set design for the Spectrum campaign was created by Studio MILO, using elements from the brand's Salone del Mobile presentation in Milan earlier this year.

"We reused these for our photo-shoot and will reuse them for future trade-fair stands, giving a second and third life to the materials, before they are permanently recycled."

The studio contrasted the colours within each rug with dramatic colour-block lighting for the campaign images. These were taken against a white backdrop, with coloured gels used to create the appearance of distinct architectural elements.

"We used light to create the architectural environment," explained Lora. "All the colours were chosen to re-create the visible colour spectrum."

The campaign images were shot by photographers Alessandro Oliva and Jeremias Morandell, with creative direction by Motel 409.

The name of the campaign speaks to the spectrum of artists, ideas, materials, colours and production techniques that come together for the project.

"For the Spectrum collection, we chose artists with completely different visions," explained Lora. "We didn't intend for there to be any aesthetic coherence."

"Every design has its own unique style which required different materials, different yarn thicknesses and different densities. It forces us to push production, to introduce new ideas and processes to an ancient production-technique," continued Lora.

The particular Tibetan method is unique in the rug-making world thanks to its slit-loop technique which involves yarn from Himalayan sheep wool being knotted into a row of loops and finally slit to create a pile.

Every knot in a CC-Tapis rug is made by hand in Nepal.

For the rugs that appear in the Spectrum campaign, the wool is supplemented with silk, linen and cotton weave alongside aloe and metallic fibres to create a range of different textures.

"To imitate the gradient effect which is inherent in all of his work, we had to develop and create completely new yarns," explained Lora.

"For every level of gradient in the design, we hand-spun yarns which combined six individual threads in two different colours."

For her second collaboration with the brand, Patricia Uriquiola took inspiration from Fordite, a byproduct of manual car manufacturing and a sort of man-made jewel that consists of layers of hardened enamel paint.

To take this idea into the world of textiles, Uriquiola and Lora's team at CC-Tapis created a new technique that reuses otherwise wasted yarns from the brand's production process.

Urquiola's Fordite rugs for the collection were longlisted for a Dezeen award 2019 for best sustainable design.

The resulting two rugs in the Feathers series feature wool, cotton and silk piles of different heights to create a sense of depth.

"To achieve the extreme detail of the design we had to use an extraordinarily high density of individual knots: 232,000 per square metres," said Lora.

For their Plasterworks series, which comes in eight variations, design duo David/Nicolas, wanted a range of contrasting textures.

"We had to combine finishing techniques with parts of the rug being perfectly shaved and hand-sculpted, while others were left raw," explained Lora.

Similarly, The Lunar Addiction series by Milanese design agency Studiopepe and Envoleé, created in collaboration with architect Cristina Celestino, each combine different materials densities to create contrasts within one and the same colour family.

CC-Tapis was founded in France by husband-and-wife duo Nelcya Chamszadeh and Fabrizio Cantoni, before moving to Milan in 2011.

Spectrum marks the culmination of a series of high-profile collaborations for the brand, including with Studio Klass on a collection of rugs that pays homage to Renaissance art and with Patricia Urquiola on a series that brings optical illusions into homeware. 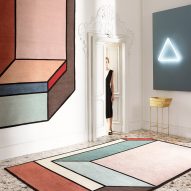 Other experiments in rug-making recently featured on Dezeen shine a light on the hidden side of embroidery and recycle old Adidas trainers.

Photography is by Jeremias Morandell unless otherwise stated, with creative direction by Motel 409.