Gabion walls, laminated wood and concrete were used to form this cave-like beer hall in southeastern Brazil, which was designed by SuperLimão Studio to minimise energy usage.

Toca do Urso – the Portuguese term for "bear lair" – is located in Ribeirão Preto, a city in southeastern Brazil with a hot climate. The project entailed creating a taproom and beer garden for the Cervejaria Colorado brewery, which was established in 1995.

"The project sought to take advantage of what already existed in the surroundings, such as the crown of two large trees that shade the area a good part of the day," the studio said in a description.

Encompassing 2,000 square-metres, the tap room and beer garden were constructed in front of the brewing facilities, on the site of a former parking lot.

To ensure a comfortable atmosphere without the use of air conditioning, the team decided to sink the building 1.5 metres below the ground.

The excavated dirt was used to form a tall berm, or raised bank, that encircles the building. The raised edge helps keep the area cool while blocking noise from a nearby highway. Native trees were also added to the landscape to help mitigate the "heat bubble".

The building has an irregular plan. Radiating around the circular main hall are concrete volumes that contain seating, storage space, and restrooms. The main area has no doors, enabling the interior to seamlessly merge with the open-air garden.

To help ensure thermal comfort, the walls are made of concrete and gabion cages filled with grey rocks. Concrete was used for the flooring.

The cool surfaces are contrasted with wooden accents and furniture, which add warmth to the space. The team noted that most materials in the building came from within 20 kilometres of the site. 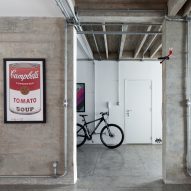 Hovering above the hall is a robust canopy made of laminated timber beams and lightweight sandwich panels.

An oculus enables natural light to stream into the space, while also bringing in fresh air and providing a connection to the trees and sky above.

Acoustics played a role in the canopy's design. The underside is shaped in a way that channels sound to the outdoors. This not only reduces internal noise, but also evenly distributes music when bands are playing.

While the building has an air-conditioning system, it is only used on critical days. To help passively cool the building, the team installed grates and a series of under-floor water canals that add humidity to the air.

"The air is renewed and humidified, reducing the temperature naturally as in old medieval castles," the studio said.

The array of tactics used to cool the building have been effective. According to the architects, the building's interior temperature is approximately 15 degrees celsius cooler than outside.

SuperLimão Studio has an eclectic portfolio of commercial and residential projects.

Other projects by the firm include the overhaul of an apartment within a 1960s building designed by Oscar Niemeyer that features a ribbed ceiling and board-marked concrete walls.

The firm also worked with Fernando and Humberto Campana to create a furniture showroom in São Paulo that features a facade made of plant-filled vases.