Built over the Louisiana Purchase restaurant, The Louisiana apartment complex in San Diego is constructed around a series of open courtyards and expansive timber-clad decks.

San Diego studio Jeff Svitak designed the 15 apartments and on-site restaurant, which are both named after the location on Louisiana Street in the upcoming North Park neighbourhood.

The housing is built around a central courtyard, with additional voids built around the building so that each unit has a private outdoor deck.

"Naturally, with creating outdoor rooms open to the sky, the footprint of the building gets smaller every floor as it goes up," explained the studio.

In the central patio space the studio used smooth white plaster to finish the walls and concrete pavers  to cover the ground with the aim of  making the enclosed area feel large and open.

"The void spaces are all designed to be private and open to the sky," the studio said. "The mass was designed around the void, placing value and intention on these empty spaces, so that 100 per cent of actual building volume is utilised efficiently."

The open spaces help to passively cool the apartments, with cool air that collects in the courtyards and flowing into the surrounding rooms as warm air passes over the building.

"The larger ones are view windows while the smaller are more for ventilation," Svitak told Dezeen. "The square profile gives a level of consistency to it all since they are seemingly random in placement." 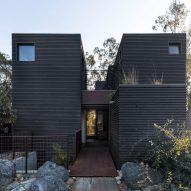 "The outside becomes so much a part of the floor plans that several of the apartments work around an outdoor space that you have to use to access the different rooms," Svitak explained.

Louisiana Purchase, the dining space on the ground floor, has a serendipitous origin. Its owners were looking to open a restaurant influenced by New Orleans culture and cuisine and ended up doing so at The Louisiana on Louisiana Street.

So, naturally, its name references the historic land transfer of 1803.

The restaurant is divided into several areas. An indoor dining area marks the front corner, while the back accommodates a kitchen with large windows that expose it to outdoor seating.

The bar is covered with leathered gray piertra marble. Kiln-dried Douglas Fir latticework masks the ceiling of the entire interior and extends outdoors in the form of a trellis.

"Landscape takes a prominent role as the lines between interior and exterior are fully blurred," Svitak added. "The seating flows throughout a variety of different scenic and semi-reclusive spaces."

An outdoor patio wraps around the restaurant. Its centre is marked with a large ficus tree which obscures more secluded seating.

Jeff Svitak's other work includes a blackened wood cuboid house and studio he designed for himself in San Diego.

Photography is by Onnis Luque, unless otherwise stated.