BPN Architects has built a partially sunken house "purely from concrete" in the village of Moreton Paddox, Warwickshire, UK.

Named Ghost House "on account of its ethereal presence on the site", the home is embedded into the ground so that it is only partially visible from the road.

"You get a glimpse of the property and get a feeling that there is far more to it that you can initially see," explained the client.

"The name also relates to the transparent beauty of the build both through its use of glass and the reflections from the pools."

The home has been designed to be dramatic, with the main entrance reached by crossing a reflecting pool before descending into a sunken courtyard.

This enclosed space is surrounded on three sides by steel-framed windows, while the home is entered through a simple black door set within a concrete wall as an "understated entrance into the house".

The entrance leads directly into an open-plan living and dining room that is fronted by a double-height glass wall that looks out onto another sunken courtyard.

"The sense of arrival and plan form of the house adds to the drama as you move through it, always within sight of a courtyard or light well," said Phill Shepherd, project architect at BPN Architects.

The main living space is arranged around a central island kitchen with a dining area at one end and sofas at the other. 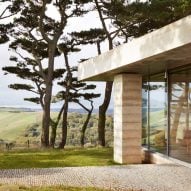 A pair of symmetrical folded-steel staircases on either side of the house's main entrance lead to the master bedroom directly above, while a further two guest bedrooms and a cinema room are arranged around the entrance courtyard on the ground floor.

The entire house is constructed from concrete cast in-situ, with the material left bare throughout the home.

"The client was inspired by the work of Tadao Ando and other architects from around the world who have built houses purely from concrete," Shepherd told Dezeen.

"There is a beauty to be found in the as-cast finish of concrete which can be achieved through an in-situ design."

The house joins a group of architect-designed homes in the village of Moreton Paddox that have been built over the past five decades.

"There is a tradition in the settlement for bespoke architect-designed homes from the settlement's conception, post world war two," explained Shepherd.

"Ghost House is a 21st-century addition to the settlement, which is different to its neighbours in its form and materiality but stays linked to the settlement as part of the evolution of the area."

Ghost House won planning through "paragraph 55" of the National Planning Policy Framework, which allows for exceptional homes to be built in rural locations and Shepherd believes that the construction of one-off homes should be encouraged in the UK.

"In the UK we should be encouraging more people to build their own bespoke houses, tailored to how they would like to live," he said.

"Unfortunately the current planning system and volume house-builder mentality restricts opportunities for people to be inventive and creative in the design of their houses."

In the UK, recently Peter Zumthor completed countryside villa in Devon "in the tradition of Andrea Palladio", while Norm Architects designed a contemporary farmhouse in the Suffolk countryside.

Photography is by Felix Mooneeram.