Architecture firm Payette has created a pedestrian bridge at Northeastern University in Boston with tall metal walls and slender glazed openings that offer a glimpse of passing trains.

Stretching 320 feet (98 metres), the bridge links the core part of campus on the north with the new Interdisciplinary Science and Engineering Complex (ISEC) on the south. The 234,000-square-foot (21,739-square metre) building was also designed by Payette.

The curving bridge, which passes over five active rail lines, also serves as an important pedestrian link between the Fenway and Roxbury neighbourhoods.

"It is a much-needed safe and fully accessible route at a key juncture in Boston," the firm said in a project description.

At the northern end, the bridge is entered via stairs or an elevator. On the other side, it flows into the sloped landscape surrounding the ISEC building.

The bridge is supported by steel girders, with the west beam carrying the primary load of the span. The deck is constructed from steel decking topped with concrete.

Walls consists of overlapping panels of weathering steel, a sturdy material that requires minimal maintenance – a key consideration given the bridge's location. 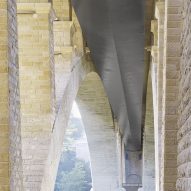 "By using weathering steel instead of a painted finish, we eliminated the need for rail agency shut-downs for periodic re-painting," said project architect Parke MacDowell.

"The rich texture of the material was a welcome secondary benefit," he told Dezeen.

The parapets vary in height from 3.5 to 18 feet (one to 5.4 metres) and lean outward about 10 degrees. On the east side, the team angled the panels and added glass infill, allowing views of the urban terrain.

"Traveling across the rail corridor, the bridge arcs and grows taller, its parapets canting outward and rotating to expose slender glass vision panes with views to the Northeastern campus, rail corridor and Boston skyline," said the studio.

Open 24 hours per day, the bridge is illuminated at night by LED cove lighting.

Given its location over busy railway tracks, the bridge was designed to minimise construction time with many elements fabricated in Texas and shipped to the site.

"Working over the railway tracks is expensive and challenging logistically, so you want to move swiftly and safely," MacDowell said.

"Our approach was to fabricate as much as possible in the shop, assemble the remaining elements in the laydown yard adjacent to the site, and drop the primary spans in place overnight."

Other recent bridge projects include a pedestrian and cycle path suspended beneath Pont Adolphe in Luxembourg, which was designed by Christian Bauer, and a bridge in Vietnam by TA Landscape Architecture that is held up by two giant hands made of fibreglass, mesh and steel supports.

Photography is by Warren Jagger. Top image is by Tanguy Marquis.