Bunkbed-style seating nooks and an indoor play area are among the features at this Columbus office, which was designed by architecture firm NBBJ for a company that creates dog toys and treats.

The Bark office is located in the Ohio city's Franklinton neighbourhood, a deprived district that is now being revitalised.

Spread across two floors, the office is situated within a large, mixed-use development that was also designed by NBBJ, a Seattle-based firm with offices around the globe.

Founded in 2012, Bark is a New York-based company that produces toys and treats for canines. The Columbus office houses its Barkbox division, which mails out boxes of dog goodies to monthly subscribers.

NBBJ set out to create a pleasant work environment that aligned with the company's mission and branding. Because employees are allowed to bring their pups to work, the office needed to "withstand dirty paws and unplanned accidents".

"The design team worked to define an office space fit for the 200 hardworking employees that make up the company's Happy Team — their enthusiastic and friendly customer service group — and their energetic canines," the studio said.

Encompassing 2,044 square-metres, the office contains a variety of areas for working, socialising and playing. Durable, cost-conscious materials were used throughout the space to accommodate the pets' unpredictable behaviour and a limited budget.

There are no assigned desks in the office. Instead, employees shift around to different areas, depending upon their work needs and personal preferences. Among the offerings are sit-to-stand desks and work stations with built-in areas for dogs.

The office also features a number of unconventional workspaces, including "amenity bars" that resemble bunk beds. The plywood units have various-sized nooks for working and lounging, along with areas for stashing leashes and backpacks.

Cushions are upholstered with faux leather, while pillows are covered in Carnegie Fabrics' Xorel, a bio-based upholstery that can be cleaned with bleach.

For a livelier atmosphere, employees can camp out in the "work-and-play lounge", where their pups can run up and down a ramp, slip into a hiding spot, and frolic in an open area with toys. 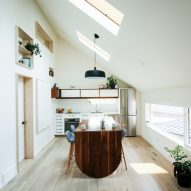 For those seeking a quieter atmosphere, the office has a number of lounges fitted with house plants and comfy seating, including rocking chairs from JSI Furniture.

"Living-room environments offer the comforts of home and are tucked away from the large neighbourhoods of workstations," the studio said.

The office has two kitchens with food and beverage options for both employees and their pets. Stained-maple butcher-block-style countertops contrast with pale blue cabinetry finished with a plastic laminate by Octolam.

Conference rooms feature glazed walls with playful graphics that are modelled after Bark's top-selling toys. The graphics were created by the company's in-house designer.

For the entrance area, the team designed a shelving unit with a chevron pattern that alludes to tick marks in the Bark logo. The fold-down display showcases products by the pet company.

Other elements in the office include LED lighting and exposed ceilings, which were painted white. In all circulation and open-work zones, the team used concrete flooring. For other areas, traditional carpet was strictly avoided.

"Non-concrete flooring is either a woven vinyl product from Bolon or rubber flooring, both specified to withstand the demands placed by the dogs," the studio said.

Additional amenities at the office include patios and a rooftop terrace. Just outside the office is an outdoor dog park, where pets can relieve themselves.

Other designs for dogs include a house in Vietnam with a special staircase for the owner's pooch, and a dwelling in Vancouver that features built-in dog nook with a circular opening.

Photography is by Sean Airhart and Chuck Choi.