Dezeen promotion: architects and designers working across Asia can now submit their hotel projects to the 2020 edition of the AHEAD awards.

Recognising striking hospitality projects from across the world, the AHEAD awards looks at projects from four different regions: Asia, the Americas, Europe and the Middle East and Africa.

The AHEAD Asia 2020 competition will consider projects that have opened, reopened or launched in the continent between September 2018 and August 2019.

Projects will then be carefully reviewed by an expert panel of architects, hoteliers, designers, developers and industry commentators. Catherine Martin, managing editor of Sleeper magazine, and Chris Lee, creative director of design studio Asylum, were among the judging team last year. 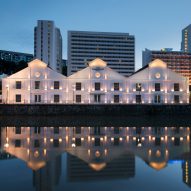 "The judges will be looking for submissions showing rigorous and appropriate design, demonstrating a sensible use of budget to contribute to the guest experience as well as the 'theatre' of hotel life," explained the AHEAD team.

Winners will be announced in a ceremony at the Andaz Singapore hotel on 12 March 2020.

The much-coveted Hotel of the Year title in the 2019 edition of the AHEAD Asia awards was given to Amanyangyun Shanghai, which occupies a handful of Ming and Qing dynasty buildings.

Other winning hotels from AHEAD Asia 2019 include Sri Lanka's Wild Coast Tented Lodge, which is composed of a series of cocoon-like pods, and Guntû, which is set inside a boat that sails along Japan's Seto Inland Sea.

Entries to AHEAD Asia 2020 cost £250 (plus VAT) per project and per category. First-place projects will go on to contend against winners from other regions in a global biennale, where worldwide titles are awarded.

For more information about the awards visit the AHEAD website.