The reported drone strike that set fire to two oil production facilities in Saudi Arabia on the weekend highlights the rising threat of "massive disruption" posed by swarms of cheap, unmanned flying devices, according to designer Clemens Weisshaar.

On Saturday 14 September an oil production facility in Abqaiq and the Khurais oilfield, both run by Saudi Arabia's state-run oil production company Aramco, were attacked by air. Aramco called the attacks acts of terrorism in a statement.

"The drone strike on the heart of the global petroleum production was the first known coordinated massive swarm drone strike," Weisshaar told Dezeen. "And it was potentially executed by a non-state actor on a budget."

Weisshaar added that clouds of simple drones were increasingly capable of "hitting a strategic target and causing massive disruption".

Crude oil prices have jumped as much as 10 per cent following the attack. The drone strike disrupted 5.7 million barrels of crude oil production, representing half of the kingdom's output.

The attacks come amid mounting concerns over the destructive use of unmanned aerial vehicles (UAVs) and confirms statements made in Dezeen's 2018 documentary, Elevation, which explores how drones could change cities.

In the movie Weisshaar, cofounder of design and technology studio Kram/Weisshaar, highlighted the potential for drones to be used in terrorist attacks: "It is surprising how little has happened with commercially available drones, because there is stuff that can carry considerable payloads," he said.

"It's a real option. Gladly nothing has happened there yet, but it will."

Swarms of drones, acting by human control or autonomously, have so far mostly been used for benign purposes such as architect Carlo Ratti's flock of graffiti-painting UAVs or Studio Drift's choreographed performance involving 300 devices.

Last year transportation design studio PriestmanGoode unveiled a concept for home deliveries carried out by hundreds of small drones instead of road vehicles.

However this could rapidly change as the destructive power of clouds of drones becomes apparent.

Drone expert Liam Young said in the movie: "Itʼs now got to the point that technology has become democratised because theyʼre now in the hands of everybody. And then you start to see them being used for ways in which they weren't intended."

Latest example of drones used to cause disruption

In December last year a suspected drone incident that led to the closure of Gatwick Airport in England, drone expert Liam Young told Dezeen: "It's a perfect example of how technology evolves at a much faster pace than culture does."

Last year a drone with explosives strapped to it was reportedly used in a failed assassination attempt on the president of Venezuala, prompting Shenzhen-based drone manufacturer DJI to make a statement to Dezeen that it couldn't control what its technology was used for. 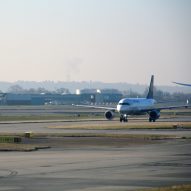 However Weisshaar said the Saudi attack marked a dramatic escalation in autonomous warfare.

"It's time to start worrying about the upscaling potential where state actors deploy large numbers of assets or very physically massive ones like the sometimes nuclear-powered autonomous submarines, drones and cruise missiles that are in the works in Russia," he said.

"And even more so about the ongoing massive efforts by all players to add AI to the mix creating autonomous lethal weapons," he added."In which case a drone, or hundreds of drones, could loiter and strike at will."

The Yemen-based Houthi movement – a resistance group rebelling against the Saudia Arabian government – has claimed the drone attacks, saying it sent 10 of the weaponised flying robots towards the facilities.

Houthi rebels, that claimed the attacks, have launched previous drone attacks at targets within Saudi Arabia, including in May where damage at two pumping stations affected the Aramco East-West pipeline and its oil supply.

According to a UN Security Council report published in January, the Houthi movement uses UAV-X drones, nicknamed suicide or kamikaze drones because they are destroyed when used to attack a target.

The UN report stated the models of unmanned aerial vehicles that the Houthis use are the Qasef-1, the Rased and the Hudhud-1. The Rased is reconnaissance drone based on the Chinese-made Skywalker 8-X.

"The international bodies will need to regulate AI warfare quickly and on eye level with nuclear, biological and chemical warfare to avoid disaster and proliferation to rogue actors," he added, saying the pace at which governments and international bodies were dealing with the new threat was "alarmingly slow".

Main image is by Planet Labs.