Recycled materials can be used to make luxury products says Matter of Stuff, which has created its London Design Festival 2019 exhibition by repurposing elements of its show from 2018.

Matter of Stuff – a London-based design and manufacturing consultancy and gallery – made the exhibition, called A Second Life, using 5,000 wooden dowels that were previously used for the scenography of last year's show.

While last year the dowels were suspended from the ceiling to create a dramatic backdrop, this year they have been transformed into geometric screens, as well as a series of highly crafted furniture and lighting designs.

The message behind the show is that being sustainable doesn't have to mean settling for lower quality products or being less creative.

"For us, luxury really is about the time and thought that you give to something," said Simona Auteri, who leads Matter of Stuff in partnership with Sofia Steffenoni.

"You don't have to excavate a whole chunk of earth to produce something luxurious, you can reuse to create something that has never been seen before," she told Dezeen.

A Second Life is on show at London restaurant Sketch. In the spirit of the theme, Matter of Stuff brought back designers it worked with the year before.

Brodie Neill, Matteo Fogale and Studio Furthermore have all made unique products, while Pim Studio created the exhibition design.

All four worked with the pine dowels, which were chosen the first time around with the knowledge that pine is easily recyclable, but also – unlike recyclable forms of plastic – is a natural material that is non-polluting.

"Being sustainable is an overall thing, it's not just one element," explained Steffenoni. "It can't just be about recycling, it needs to also be about the first thought, of using materials that are non-toxic."

The pair were careful to create a design that didn't use any glue, so that the components could be disassembled and reused. 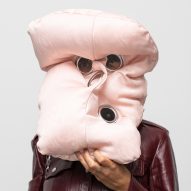 Fogale believes that, as designer, the best way to promote sustainability is to find ways of repairing or recycling existing products and materials in a way that allows them to retain or increase their value.

"The best way to be sustainable is not to make anything, but the reality is that's not going to happen, because people do need new things," he said.

"We need to think about how we consume those things and how we reuse what we've already consumed," he told Dezeen. "Nothing has to be thrown away, everything can be fixed or repurposed."

Brodie Neill used the dowels to create a sculptural bench, Latitude. The dowels are laid flat in two directions, creating a 2.2-metre-long lattice. There are no visible fixings – the pieces stay together with concealed indents and a very small amount of glue.

The exhibition is very much in keeping with Neill's approach, which often sees him try to elevate the status of recycled materials. His Ocean Terrazzo transforms recycled plastic into a high-end surface material.

"I've been struggling for 10 years now trying to change people's perceptions of what waste is," Neill said. "There is all this potential in these old materials."

Studio Furthermore combined the dowels with the sawdust made while cutting them, creating lighting sculptures with textured surfaces. These are finished in various rich colours.

All three products are arranged around Pim Studio's screens, which comprise overlapping layers of wooden dowels, held in place by small metal brackets. These brackets can be easily added and removed, making is easy to either disassemble or create new arrangements.

The objects will be sold once the exhibition is over, with the proceeds going to support the Amazon rainforest.

Surplus material will be donated to Camberwell College of Arts. Matter of Stuff is also exploring whether it can use some of the waste to create a sustainable architectural material.

"We have to keep on experimenting," said Auteri, "but doing it in a way that is circular, that doesn't create damage."

A Second Life will be on show at Sketch, at 9 Conduit St, Mayfair, until November.