Dutch designer Edward Van Vliet explains the engineering challenges he faced when designing the all-glass Kaipo Too table lamp for Moooi in this video produced by Dezeen for the furniture brand.

Van Vliet, who runs Amsterdam-based Studio Edward Van Vliet, is the designer behind the Kaipo Too table lamp, which was launched by Moooi on 12 September 2019 in London.

Kaipo Too is a table lamp which features a base and shade made of Venetian mouth-blown glass, and comes in smokey grey and sepia-tinted versions.

Van Vliet is a contemporary of Moooi founder Marcel Wanders, who showed an interest in early designs for the lamp around the time of Moooi's inception.

"When Moooi was established, Marcel Wanders was interested in my table lamp named Kaipo," said Van Vliet. "After doing a lot of research for the right way to get it produced, we released the Kaipo Too."

Designing a table lamp with a base and shade made entirely of fragile and heavy mouth-blown glass made for a difficult and lengthy development process.

"The development of Kaipo Too was a very long and challenging journey," stated Van Vliet. "Glass is a fragile material, so you really have to think about, you know, how we are going to connect the shade to the base."

According to Van Vliet, the lamp's transparency and its mixture of classical and modern forms means that it can be incorporated with ease into a wide range of interiors.

"Kaipo Too is a lamp that works very well in a classical interior, but also in a very modern interior," Van Vliet says in the video interview, which was filmed by Dezeen at his studio in Amsterdam. "It's a sort of chameleon that goes everywhere."

In the lengthy period between the inception and production of Kaipo Too, Van Vliet also designed a pendant lamp for Moooi named Chalice, which features fluted glass fixtures emerging from a metal sphere. 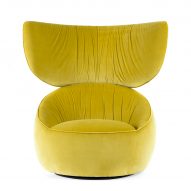 According to Van Vliet, Moooi offers designers opportunities to realise their ideas in production and join a global community of designers.

"Moooi for me it's not only a brand, but almost a sort of platform for designers," he said. "They bring unique designers and unique designs together."

The Kaipo Too lamp was launched at the Moooi showroom in London on Thursday 12 September. It will remain on display throughout London Design Festival at 23 Great Titchfield Street, Fitzrovia, London, W1W 7PA.

This movie was filmed in Milan for Moooi. It is part of an ongoing collaboration between Dezeen and Moooi called Design Dreams exploring how successful designers turned their dreams into reality.