Two friends who met working at Fritz Hansen in New York have opened their own furniture store in the Hudson Valley, filled with mid-century and contemporary designs.

Karolina Dabo and Adrian Pollack met about 10 years ago at the Danish furniture brand's Manhattan office, where Dabo worked as marketing manager and Pollack was the head of sales.

After switching companies and spending time at other furniture design brands like Flos, Tom Dixon and Molteni&C, the two decided to leave their positions and open a furniture store outside the city.

"Between myself and my business partner, we have about a combined 30 years experience within the interiors and architecture industry," Dabo said.

Gestalt is in the town of Hudson, New York on Warren Street and features large storefront windows to reveal a shop full of designer furnishings. Dark blue walls and wood floors provide a cosy background for the pieces.

"Hudson is a great little city that is home too many creatives that commute to Manhattan or have a second home outside NYC," she said. "It's a community that appreciates art, design, architecture, culture and fashion."

The majority of the pieces are from Denmark and Australia. 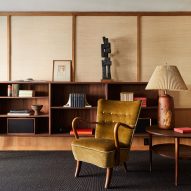 Other works include pieces by Ariake, a Japanese brand led by creative director Gabriel Tan that has designed pieces in collaboration with Norm Architects, Staffan Holm, and Anderssen and Voll.

In addition to this shop, Pollack and Dabo also have a design office in Manhattan where they work on commercial projects with architects and interior designers.

Hudson is part of New York's Hudson Valley area in Upstate New York, which is a bucolic area about a three-hour drive north of New York City.

The town used to be a thriving industrial city in the early 1900s with its port on the Hudson River but was abandoned in the 60s. It recently experienced a revival with many restaurants, hotels and boutique shops are nestled within its quaint downtown streets.

"First came the antique dealers capitalising on the forgotten homes and furniture, then artists and writers, and now it is the hotspot for second homes for Manhattan's creative community," the two said, adding that its popularity is akin to the Hampton's beach communities.

"Considered by some to be the 'new Hamptons', it is truly a melting pot of design and creativity, with a uniquely relaxed guard," they continued.

Other projects close to Hudson are Hotel Kinsley in the town of Kingston by Studio Robert McKinley, Magazzino Italian art gallery by Miguel Quismondo, and Troutbeck hotel by Champalimaud.

A number of houses have cropped up around Hudson Valley in the past few years as well, including a wood home with a jagged roof by Tsao & McKown, a shingled black cottage by Thomas Phifer and Partners and a mid-century house renovated by Brooklyn studio GRT Architects.