BIG has revealed plans to create an angular building that will be a "one-of-a-kind vertical village for film" in New York City's Queens borough.

"It has been incredible to work with such an iconic cast of collaborators from all aspects of visual media to imagine the future of film production in New York City," said Ingels.

"This studio is a testament to the strength and future of the New York film and television production industry," Robert De Niro added. "Completion of this project ensures that future generations of producers, directors, writers, and storytellers will play a vital role in filmed entertainment in New York for years to come."

Billed as a hub for film, television, augmented reality and virtual reality, the 650,000-square-foot (60,386-square-metre) Wildflower Film Studio is intended for a plot along Steinway Creek in Queens that was formerly occupied Steinway & Sons piano storage facility.

"Due to the unique space conditions of working on an urban site, we were challenged by Wildflower to distill all the physical, logistical, technical and experiential aspects of film production into a one-of-a-kind vertical village for film," said Ingels.

Renderings of BIG's design show an angular dark building surrounded by a large expanse of green space, which forms part of land conservation areas for the local community to use.

Greenery forms a key element of the design, which includes openings that are embedded deep into the walls to create small, plant-filled balconies, and a plant-covered terrace.

The front facade of the studio is punctured with a tall glazed entrance on the ground floor and subtle perforations that offer additional illumination inside the building. An image of the lobby reveals that interior walls will comprise stacked blocks with openings that allow natural light to filter or create pockets for greenery. 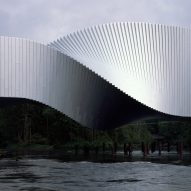 The pale blocks are shown to form seating along the hall that leads into areas on the same level. A staircase also curves up the rear to provide access to higher levels.

Wildflower Development Group have submitted plans for the Wildflower Film Studio  to the the New York City Council, and are awaiting review. Construction is expected to begin next year.

BIG was founded by Ingels in Copenhagen in 2005, and has since expanded to locations including London, Barcelona and New York.

Wildflower Film Studio is among a number of projects by the firm that are either complete or underway in New York. Others include the VIA West 57th "courtscraper", which opened in 2016, and a pair of twisting towers on the High Line that are expected to complete later this year.