The third Chicago Architecture Biennial draws attention to the biggest issues facing today's society, but is short on architects wrangling with them, says Mimi Zeiger.

The third edition of Chicago Architecture Biennial (CAB) opened its doors one day before Chicago school children gathered in Mies van der Rohe's Federal Plaza as part of the Global Climate Strike. It begins during a month when President Trump feuded with California over housing policy and the state's homelessness crisis, and at a time when shootings in Chicago's West and South sides are reported every few days and the fires in Brazil continue to burn.

It was a week, like many weeks in recent memory, which underscored the themes of the biennial curated by artistic director Yesomi Umolu, curator/educator Sepake Angiama and architect Paulo Tavares.

Although its lowercase title ...and other such stories might suggest a more recumbent position, this biennial is teaming with anthropogenic urgencies: violence caused by structural racism, global housing inequities, and scars left by colonisation and resource extraction.

One comes away with a deepened sense of architecture's complicity

And while exhibitions and biennales over the last decade have tackled these subjects, often showcasing the architects and designers as hopeful agents of change and architecture as a solution to a wide range of social ills – from the Cooper Hewitt's Design for the Other 90% (2007) to MoMA's Rising Currents (2010) or Foreclosed (2012) to Reporting From the Front, the 2016 Venice Architecture Biennale curated by Alejando Aravena – one comes away from ...and other such stories with a deepened sense of architecture's complicity, rather than it's saviour complex.

Created by the Settler Colonial City Project, founded by architectural historians Ana María Leon and Andrew Herscher, in collaboration with Chicago's American Indian Center, it is a physicalised hypertext of how the construction of the iconic structure was part of express crimes against Indigenous lands and people.

They call attention to dark material histories, such as how the Chicago Cultural Center's beautiful mahogany doors were made out of wood extracted from East India under British colonial rule. 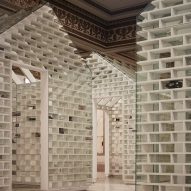 A quartet of hanging panels positioned in the stately windows overlooking Grant Park read: YOU ARE LOOKING AT UNCEDED LAND and a text explains how landfill reclaimed from the shore of Lake Michigan with Chicago Fire rubble violated treaties signed by the Pokagon Potawatomi tribe in 1833.

Both Leon and Herscher are professors at University of Michigan and their piece is as much pedagogical as activist – settler colonialism is not just a past injustice, its ramifications continue into the present.

Contemporary crises track though more than 80 works by artists and activists, urban designers and architects, with a strong emphasis on practitioners from Chicago – Theaster Gates, Emmanuel Pratt's Sweet Water Foundation, and Borderless Studio's ongoing community engagement and development work at a closed Chicago public school – and what is often called the global south, including South Africa, Palestine, Brazil, and India.

Notions of visibility, surfacing, and transparency play out in both the strongest and weakest presentationsory

This make-up, according to Umolu, reorients the exhibition, shifting its discursive focus from the field of architecture and the internalised debates that plagued previous editions to the public who visit the Chicago Cultural Center.

If the imperative of the 2017 edition was Make New History, the collective demand of 2019 is "make visible". It's a noble and timely premise as the #metoo movement surfaces past abuses and the finances/ affiliations of cultural institution board members are routinely scrutinised, but also risks drifting into "cancel culture" territory.

Indeed, Chicago Tribune architecture critic Blair Kamin kicked off the biennial by using his column inches to call for absolute transparency among architecture critics and design journalists, like myself, whose routine press trip was underwritten by CAB. Trust, he argued, is dependent on disclosure. And yet Kamin glosses over the boycott of the biennial called by ArchiteXX. The gender-equity advocacy group objects to sponsorship by energy giant BP, as have other artists and architects in past editions.

Within the halls of the Chicago Cultural Center, notions of visibility, surfacing, and transparency play out in both the strongest and weakest presentations. This makes for an uneven and not particularly photogenic display. The usually brilliant Mexico City-based architecture firm Productora is credited as exhibition designer, but their contribution of grey plywood furniture and cabinetry seems institutional, like something installed by a department of cultural affairs decades ago. 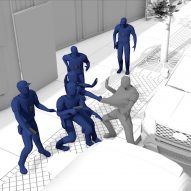 The under-designed feeling continues in the bright white corridors: there are only 43 installations on view in the building (other contributions are off-site or performances) and the scaling back has left many circulation areas not only free of artworks, but also with little to remind visitors that this is a multi-million dollar architecture exposition.

Clichés quickly stack up: extensive research for visitors to read, aka the "book on the wall", lots of plywood, participatory gathering spaces and dense video works. After so many years of this kind of exhibition making, shouldn't we reevaluate the efficacy and visual delight of these approaches? Which is why a favourite piece is Skievvar by artist-architect Joar Nango, which playfully combines paper-thin dried halibut stomachs, traditionally used as windows in Indigenous Sámi construction, with video projections to speculate on a post-colonialist architecture.

Yet, in a ground floor gallery, a pair of flat screen monitors show City Housing in a Cultural Matrix (Mumbai) by collective CAMP, a three-part interactive film – each more than 90 minutes – documenting the complexity of urban housing and slum clearance in Mumbai through archival footage, legal documents and interviews. It's impenetrable.

More successful is the gallery dedicated to RMA Architects' Sanitation and Equity, research on waste and water infrastructures in Mumbai shown in charts, photographs printed on scrims, projected films, and a few design strategies. There's a lot to wade through, but the installation's pleasing aesthetic helps to convey the narrative.

Forensic Architecture's is perhaps the most powerful installation in the biennial

Similarly, there's a poignant clarity in the Center for Spatial Research's unpacking of predictive algorithms in Homophily: The Urban History of an Algorithm. Text, diagrams, and an LED digital display, visualise a model that results in segregation in data sets and is behind Facebook's newsfeed as well as predictive policing.

I'm sympathetic to the curators' interpretation of architecture as a rhetorical practice, one not always about designing buildings. But what are we left with when architecture is stripped of its spatiality, materiality and aesthetics?

In case of the contribution by Forensic Architecture, the answer is technique. The multidisciplinary group uses visualisation and computational modeling, tools shared between forensics and architecture. Their project, The Killing of Harith Augustus, undertaken in collaboration with journalism organisation Invisible Institute investigates the 2018 police killing of a local barber.

This act of making visible is perhaps the most powerful installation in the biennial. It is, however, hidden by choice in a non-prominent gallery on the ground floor. White letters on a black background reads, "…we intend to create a pause: a moment to consider the implications of looking and to situate ourselves in relation to give rise to the human reality depicted".

The architecture profession has been reluctant to embrace its complicity, but that doesn't mean there aren't practices engaging in the same topics

The artists removed all images and videos of the graphically violent last moments of Augustus' life from the all-black room, citing "the necessity of looking and the difficulty of showing". Materials are instead available on the Forensic Architecture website at the request of his family.

…And other such stories relies heavily on artists and activists to interpret issues of justice or identity in the built environment. Yet many of the works in the show reminded me of parallel projects within the discipline.

There are architectural initiatives tackling the ethics of prison design, for example, which would have paired well with Chicago artist Maria Gaspar's stunning room-sized photograph of Cook County Jail titled Unblinking Eyes, Watching. Or, contemporary, low-income housing studies to echo Korean artist Do Ho Suh's absorbing filmic investigation, Robin Hood Gardens, Woolmore Street London E14 0HG. This leaves an uncomfortable question: were the curators simply unaware of these projects or were they deliberately avoiding architects as central figures in an architecture biennial?

Certainly, the architecture profession has been reluctant to embrace its complicity, but that doesn't mean there aren't practices, from experimental to corporate, engaging in the same topics put forth by the curators. Forensic Architecture reminds us that making visible and actually seeing are two different acts. The later requires a willingness to see.