The Central Park Tower designed by architecture firm Adrian Smith + Gordon Gill has topped out at 1,550 feet in Manhattan, making it the tallest residential building ever.

The construction milestone means that the supertall skyscraper has reached its full height of around 472.4 metres, and takes the title for the world's tallest residential building from Rafael Viñoly's 432 Park Avenue, which rises 1,398 feet (426 metres).

Adrian Smith + Gordon Gill Architecture's tower, which was created for developers Extell Development, rises a few blocks from Central Park at 225 West 57th Street. Condominiums will occupy the higher levels of the tower, with a hotel underneath and a flagship seven-storey Nordstrom store in the base.

It features a reflective exterior comprising a mixture of materials including glass, satin-finished stainless steel, that make it further stand out from its brickwork neighbours. From 300 feet (91 metres) upwards, a volume is cantilevered on the eastern side to offer park views for residents.

"Central Park Tower is the pinnacle of development in New York and around the world," said Extell founder Gary Barnett. "We would not be able to offer this level of design, quality and service without the contributions from the world's most talented architects, engineers and designers." 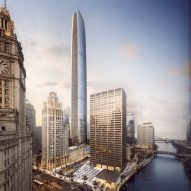 Residents will have access to a suite of luxury amenities organised by in-house private club, Central Park Club.

Among these is a large outdoor area that includes a swimming pool, sun beds, gardens and dining areas. Inside the tower is a slender swimming pool, a cigar bar, a private dining room and a grand ballroom, along with conference suites, children's play areas and a screening room.

Central Park Tower joins a series of luxury condominium buildings are lie along a stretch of West 57th Street now known as Billionaire's Row – including 432 Park Avenue and SHoP's skinny 111 West 57th Street, which is also under construction.

Adrian Smith + Gordon Gill Architecture is behind a number of record-breaking structures such as its Kingdom Tower in Jeddah, Saudi Arabia, which is planned reach over 3,280 feet (1,000 metres) high – overtaking Dubai's Burj Khalifa as the world's tallest building.

Earlier this year, it revealed plans for the Shenzhen-Hong Kong International Center, which would become China's tallest tower if completed.