Birch plywood and linoleum are among the cost-effective materials used by design-build firm Sheet/RockLA to update a collection of rustic cabins on a forested site in the San Bernardino Mountains.

The rentable cabins form the Colorado Lodge, which is located about two hours outside of Los Angeles in the small town of Big Bear. Encompassing about two acres (0.8 hectares), the lodge offers five updated cabins that were originally built in the 1920s.

The property, which is near a ski resort and lake, is owned by architecture studio Sheet/RockLA and landscape architecture firm Terremoto, both based in LA.

When the architects embarked on renovating the property, they wanted to ensure they respected the past and embraced the alpine landscape. They drew cues from Scandinavian design to create dwellings that depart from the local vernacular.

"The project is a rare example of modernity and minimalism in an area known almost extensively for log cabin design," the team said in a statement.

The gabled-roof dwellings vary in size, with the largest containing two bedrooms. Every unit has a bathroom, kitchen and living space and comes stocked with linens and dishware. One cabin offers a cosy sleeping loft. 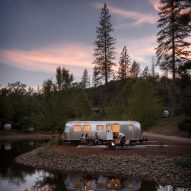 AutoCamp Yosemite is a glamping site in the California wilderness

Major work occurred indoors, where layouts were reconfigured and finishes were replaced. The team used a simple palette of cost-effective materials that befit the natural surroundings.

Pale birch plywood was used to line walls and fabricate cabinetry, while linoleum covers the floors. In some cabins, white flooring has a speckled pattern that evokes "a fresh blanket of snow atop sticks of mulch".

Countertops are made of a composite material with a rock inlay that alludes to stones in the outdoor terrain. Rooms feature contemporary decor in earthy tones such as ivory, tan and blue.

The site's landscape was largely left untouched because "it's a fool's errand to garden in the woods", the team explained. Wooden screens with an abstract, geometric pattern were added in certain areas to delineate space and reduce the visual presence of cars.

The architects are currently renovating four additional cabins at the lodge, which are slated to open next year. They will also add wraparound decks to select cabins, and construct a bridge over a creek running through the site.

The Colorado Lodge is among a growing number of modern-style nature retreats in North America. Others include a Quebec eco-resort by Bourgeois/Lechasseur that features a trio of domed cabins, and the Autocamp Yosemite glamping site by Anacapa Architecture, which offers well-appointed trailers, tents, cabins and a spacious clubhouse.

Photography is by Lauren Moore unless noted otherwise.