Gucci has featured models in straitjacket-like clothing on moving walkways in its latest show in Milan, with one model protesting the "insensitive" decision by the fashion house.

The show began with a three and a half minute introduction that saw a succession of models in baggy white clothing with the straps and ties similar to those found on straitjackets carried on moving walkways through the audience.

Ayesha Tan Jones, a non-binary artist and model who walked in the show, silently protested the use of straitjackets in the fashion show.

They held their hands raised in front of them, with the words "mental health is not fashion" written across both palms.

Meanwhile, snippets of voices played, referencing the speakers' mental health: "I don't even know what normal would be", "I guess I'm not a standard person", and "The plan is to be happy" they said.

Tan Jones posted a statement on their Instagram account the day after the show calling for an end to the "stigma around mental health".

"It is bad taste for Gucci to use the imagery of strait jackets and outfits alluding to mental patients, while being rolled out on a conveyor belt, as if a piece of factory meat," said the post on Instagram.

"Presenting these struggles as props for selling clothes in today's capitalist climate is vulgar, unimaginative and offensive to the millions of people around the world affected by these issues," it continued.

For the introduction to the Gucci presentation, the space was bathed in red light and a screeching noise blared, before arched shutters were raised at the end of four parallel catwalks revealing the models.

Whispering female voices could be heard, followed by an intense low beat overlaid with the beeping sound of medical machines in a hospital setting.

Both male and female models stood motionless and expressionless on the four moving walkways.

These had raised sides with handrails, and were similar to the walkways seen at airports. The floor of the walkway glowed green with strips of glowing light on either side. 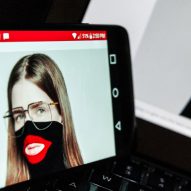 Following the introduction, the lights then went out whilst a crackling sound played in the darkness, before the regular fashion show commenced, with models walking the catwalk in colourful 1970s-style suits and oversized sunglasses.

After the show Gucci told members of the press that the straitjackets were only created for the show and would not be sold.

This isn't the first time that Italian fashion house Gucci has been caught up in a row about clothing in its collections. In February this year, the company was called out for a jumper that critics said resembled blackface.