Italian fashion designer Alessandro Michele has stepped down as creative director at Gucci, a role he has held at the fashion house since 2015.

A statement released by Kering, the brand's parent company, on Wednesday 23 November, said Michele had played a "fundamental part" in forging the brand's identity while staying true to Gucci's codes.

The designer had reinvigorated the luxury Italian fashion house, driving it to become one of Kering's biggest fashion brands, and said it had become his "adopted family."

"There are times when paths part ways because of the different perspectives each one of us may have," Michele said in the statement.

"Today an extraordinary journey ends for me, lasting more than twenty years, within a company to which I have tirelessly dedicated all my love and creative passion. "

"During this long period Gucci has been my home, my adopted family," he continued. "To this extended family, to all the individuals, who have looked after and supported it, I send my most sincere thanks, my biggest and most heartfelt embrace."

Michele joined Gucci as an accessories specialist in 2002 under the direction of former Gucci creative director Tom Ford.

Under Michele's direction, the Italian designer tapped into streetwear, maximalist, Hollywood and bohemian codes and introduced a gender-fluid approach across the brand. 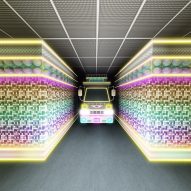 "I was fortunate to have had the opportunity to meet Alessandro at the end of 2014, since then, we have had the pleasure to work closely together as Gucci has charted its successful path over these last eight ears," said Gucci CEO Marco Bizzari.

"I would like to thank him for his 20 years of commitment to Gucci and for his vision, devotion and unconditional love for this unique house during his tenure as creative director."

Kering CEO and chairman François-Henri Pinault added: "The road that Gucci and Alessandro walked together over the past years is unique and will remain as an outstanding moment in the history of the House."

A successor has not yet been appointed

In 2019, Michele presented its Spring Summer 2020 collection on a moving walkway with a succession of models appearing in white straitjackets before its official collection in brightly hued and embellished fabrics appeared.

The brand's Autumn Winter 2020 collection was inundated with religious imagery and depicted the show as an "unrepeatable ritual".

Kering has not announced a new creative director but said that Gucci's design office "will continue to carry the direction of the house forward" until a successor is announced.

The photo is by Walterlan Papetti via Wikimedia Commons.