From the cave markings left by early man to the Swedish Parliament where Greta Thunberg began her climate strike, Es Devlin has represented crucial historical moments on a three-dimensional map at Pitzhanger gallery.

Designed for the Pitzhanger Manor & Gallery in Ealing, London, the new installation takes the form of an 18-metre-wide topographical model of a landscape made up of momentous historical events in chronological order.

The installation, titled Memory Palace, takes its name from a mnemonic technique originating in ancient Greece that relies on the visualisation of physical locations to be able to activate memories and recall information.

Artist and set designer Es Devlin chose to map specific iconic moments in history from the past seventy-five millennia that she thought would "invoke our collective memories", while also provoking dialogue and debate amongst viewers.

"When I was a child I lived next door to a 1:100 scale model of my town which performed a 'son et lumiere' show," said the designer. "The windows of individual buildings would illuminate to locate stories told in voiceover."

"In a way it was a memory palace in action: ideas, words and sounds indexed within physical architecture: I never forgot any of those stories as each was indelibly etched into the buildings I passed daily," she added.

The floor-to-ceiling sculpture curves around the space, while mirrors covering the ceiling and far wall reflect its surfaces to create an immersive, globe-like surrounding.

The main body of the piece was CNC milled from bamboo, and the buildings and monuments were 3D-printed to achieve more detail. The structure took five months to fabricate.

Marked times and places include the caves in southern Africa where homo sapiens left their first markings in the Paleolithic era.

The Renaissance period is represented by the tower in Frombork, Poland, where mathematician and astronomer Nicolaus Copernicus drew the first heliocentric map of the universe in 1543. 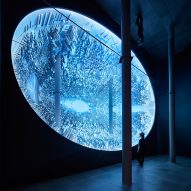 Each of these critical moments are represented as fragments of buildings, cities and land that come together to form Devlin's personalised map of the "evolution of thought".

Other locations include the rooms in Clarendon Square, London, where 18th-century British proto-feminist Mary Wollstonecroft wrote A Vindication of the Rights of Women in 1792, and the street in Montgomery, Alabama, where American activist Rosa Parks refused to give up her seat on the segregated bus in 1955.

The most recent event featured on the model is from August 2018, illustrated in the form of the steps of the Riksdaghuset in Stockholm where Swedish environmental activist Greta Thunberg began her School Strike for Climate.

"Arguably the most profound and urgent shift in thinking is located at the far edge of the chronological atlas, in the present: it's the shift we are now beginning to undertake as we re-evaluate all of our practices in the light of the climate crisis," said Devlin.

"It's my hope that, surrounded by the traces of our historical leaps of imagination, the viewer will feel a sense of possibility that our species can achieve another momentous collective shift of perspective," she added.

Devlin's Memory Palace is the second exhibition to be held in the Pitzhanger, the country home of architect John Soane, since its reopening in Spring 2019.

As the gallery organisers explain, Devlin's topographical sculpture shares similarities to Soane's vast use of models in his architectural practice, as well as in his classical collections.

As a nod to this, the designer has also transformed Soane's library space in the gallery into a reading room lined with books that informed the work.

Devlin used the same format of a three-dimensional map in April 2018, when she designed a triptych of installations for architect and BIG founder Bjarke Ingels to promote a pair of twisting towers by the firm.

The first in her trio of installations was titled Egg, and took the form of a giant concave model of Lower Manhattan, with a mirror above reflecting the composition to form an egg shape.