Zaha Hadid Architects has completed its five-pronged terminal building at Beijing Daxing International Airport, which is one of the largest airports in the world.

Designed by the late Zaha Hadid and current studio principal Patrik Schumacher, along with airport specialist ADPI, the 700,000-square-metre terminal to serve Beijing has been designed to be as compact as possible.

The airport is arranged around a central "grand courtyard" with five aircraft piers radiating directly out to give the building the appearance of a starfish from above.

The four-storey airport is arranged around this central space, which is naturally lit with a glass roof that the studio refers to as a "central orientation space dome".

The airport's check-in island, international and domestic security desks and domestic retail area are all arranged on different levels within this central area.

"Echoing principles within traditional Chinese architecture that organise interconnected spaces around a central courtyard, the terminal's design guides all passengers seamlessly through the relevant departure, arrival or transfer zones towards the grand courtyard at its centre – a multi- layered meeting space at the heart of the terminal," explained the studio.

From the central space, passengers can board planes from the 79 gates, which each have airbridges connecting directly to the terminal, arranged around the five aircraft piers.

According to the studio, this is the most efficient arrangement to quickly allow large numbers of passengers to quickly reach their planes.

"The compact radial design of the terminal allows a maximum number of aircraft to be parked directly at the terminal with minimum distances from the centre of the building, providing exceptional convenience for passengers and flexibility in operations," said the studio.

"This radial configuration ensures the farthest boarding gate can be accessed in a walking time of less than eighth minutes."

Arranged around the main courtyard space, Zaha Hadid Architects has created a series of flowing forms that support the roof and act as skylights to bring light into the space. 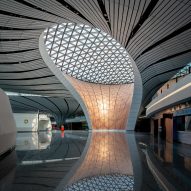 Further light is brought into the building by linear skylights that stretch the length of each of the five aircraft piers.

A sixth radiating arm contains the 80,000 square-metre transportation hub, which contains a high-speed and local rail stations, as well as a hotel and offices.

The airport is powered by solar panels and has a centralised heating system with waste heat recovery supported by a ground-source heat pump. It also has a rainwater collection and water management system.

Zaha Hadid Architects was founded in in 1980 by Hadid. The studio has been led by Schumacher, who is one of the speakers at Dezeen Day, since Hadid passed away in 2016.

The studio recently completed the Al Wakrah Stadium for World Cup in Qatar and the Opus hotel in Dubai.

Photography is by Hufton + Crow. The movie is by Dan Chung.