As one of a few female CEOs in the design industry, Jessica Walsh, founder of creative agency &Walsh, has faced criticism from women as well as men. In this interview, she tells Dezeen how she has tackled it.

To achieve this success she told Dezeen that she works to overcome sexism in an industry where just five per cent of CEOs are female.

This has led Walsh to take steps to tackle the lack of representation in the industry, by setting up a female networking organisation that has grown globally to instigating projects such as 12 Kinds of Kindness, a 12-step programme that promotes empathy.

"Being in a boardroom with much older male CEOs, sometimes people would talk over me or ignore me altogether," she told Dezeen. "There were definitely a lot of times where I faced sexism."

For Walsh, it was the "surprising" amount of women who criticised her on social media that took its toll, at a time when her career began to skyrocket.

"I started to notice that a lot of the hate I was getting in the design world was actually not from men, but from other women," she said.

"Earlier in my career when I started reaching a certain level of success and recognition in the design field, the amount of hate mail, jealous remarks and outright sexism I experienced multiplied exponentially," the designer added. 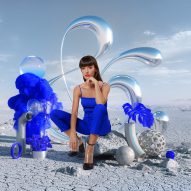 "What surprised me most about all of these remarks was that a large percentage of them came from women."

As one of the few women who have paved the way to the top to run their own creative agency, Walsh believes that competitiveness could be a reason for inducing criticism from other females.

"I found that sometimes women were unsupportive of one another, possibly because our chances of reaching the top are much slimmer than for men," she said.

"In design school, on average 70 per cent are women, but then the numbers are so small when you see who makes it to the top," she continued. "Like five per cent of CEOs. And then like 0.1 per cent in terms of leading creative agencies."

Walsh believes that representation at the top of the industry is crucial to encouraging diversity among leaders.

"Open a design history book and you'll see that almost all the famous designers mentioned are white men."

"The design industry used to be a boys club at the top, lacking diversity across both gender and race," Walsh added. "With a lack of representation among their role models, underrepresented people can be deterred from pursuing creative positions."

Walsh cites a female mentor at the start of her career as an important factor in her success, Paula Scher at New York creative agency Pentagram, who provided guidance and encouragement. Scher recommended Walsh to her role as art director at Print magazine.

"Seeing a woman [Scher] make such amazing work was very inspirational to me," said Walsh.

Walsh adds that her mother and sister Lauren, who works with her at &Walsh, are a key part of her support system.

The lack of representation coupled with the negativity she faced from other women led Walsh to create Ladies, Wine & Design (LW&D), "an initiative whose mission is focussed on the idea of women supporting rather than competing against each other".

"Other women must be able to relate to the sexism I've been facing," she said. "It's already so hard for us anyway."

She established the company three years ago with the first session held in her apartment. It has grown to comprise 273 local chapters and active communities in cities including New York, Rio de Janeiro, London and Hong Kong.

Local chapters meet "to make positive healthy relationships in the design industry" with discussions focused on business, careers and relationships.

Walsh hopes to continue changing the statistics regarding women in her industry with her new endeavour &Walsh. "I want to implement these principles [from LW&D] within our studio," she said.

"I'm excited to build an agency that provides equal opportunity for all to learn and grow creatively and climb the ranks towards leadership."

Walsh graduated in graphic design from Rhode Island School of Design (RISD) in 2008 and turned down a job at Apple to pursue a career in branding and advertising.

"I knew deep in my heart that I wanted to work on a wide variety of projects," she said. "I knew in-house it was going to be limited what I would learn."

She established her company with Stefan Sagmeister in 2012 shortly after sending him an email asking to collaborate.

"When I looked at the world of design, he [Stefan] was one of the only people I saw out there creating commercial work, but also creating work that was self-initiated and connected with me on some sort of human level," she said.

While the duo has parted ways officially, she says their relationship remains strong and will continue to work on projects. "All is great with Stefan and me," she said.

Photography is courtesy of &Walsh.