The 130 trees covered in pink, yellow and blue nylon webbing that form this installation in Columbus by US architecture firm SO-IL will be replanted at a nearby house designed by Eero Saarinen.

SO-IL planted 130 trees to make the Into the Hedge installation in the gardens of the historic Bartholomew Court House for Exhibit Columbus, an annual event showcasing art, architecture and design.

The architecture firm developed the project with the preservation team at the Miller House and Garden, a mid-century home that celebrated Finnish-American architect Eero Saarinen designed in the Indiana city. The team came up with the scheme in response to a need to replant a hedgerow of 70-year-old arbor vitae trees that wrap Saarinen's property.

When Into the Hedge is disassembled, the trees will be planted in the Miller House garden.

"After the exhibition the trees can be permanently planted in the garden, making a direct link between the installation's original architectural inspiration and a contribution to the stewardship of one of Columbus, Indiana's seven National Historic Landmarks," SO-IL said.

"Committed to taking a critical approach to preservation and material use, Into the Hedge, temporarily re-organises the elements of local construction and landscape as well as recognisable modern architecture into a memorable experience and a new landmark," the studio added.

For the installation, the planted trees are arranged among a large colourful web made with nylon. The stretchy material's vibrant colours were influenced by the colour palette that designer Alexander Girand used in Miller House.

The installation also uses limestone and stakes to form walls that give the work its curving shape. 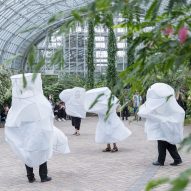 Visitors are encouraged to walk, sit and play on the netting. Several trees arranged on the lawn are connected to one another by hammocks made from the nylon.

Through a partnership with People for Urban Progress the woven material will be used to make tote bags. Other parts that comprise the piece, including the gabions, mulch, limestone and stakes, will be used in local infrastructure projects.

"Simple off-the-shelf agricultural and construction materials were used to ensure that everything could have a life afterward," the studio added.

The project by SO-IL and Miller House and Garden was created for Exhibit Columbus' J Irwin and Xenia S Miller Prize, which pairs studios to build a community focused project on a downtown Columbus site, and forms the centrepiece of the event.

SO-IL was founded in 2008 in New York by Florian Idenburg and Jing Liu. It recently unveiled designs for an affordable housing complex in Léon, Mexico.

Other temporary projects by the studio include a performance piece that created air-filtering mesh costumes capable of cleaning air through breathing.