Brazilian brand Noori aims to transport users to a time when "cooking with fire was at the core of our rituals" with its multipurpose stove, which can be used as a barbecue, a pizza oven or a fire pit.

The Noori stove comprises a curved body made from heat-resistant refractory concrete that is split into two sections. Within the stove an L-shaped enamelled pipe contains the fuel and directs heat up through the centre of the stove towards a grill surface.

The stove's configuration ensures almost complete combustion before the flames reach the cooking surface, resulting in intense heat without the smoke of a conventional fire.

The creators of Noori based the product on the traditional rocket stove design, which burns small-diameter wood fuel in a combustion chamber linked to an insulated vertical chimney.

It was developed by three friends who studied together on the Permaculture Design Course at the IPEMA university in Ubatuba, Brazil. Permaculture focuses on working with, rather than against nature, with the goal of integrating design and ecology.

"The idea was to design a product that could transport us from our day-to-day routine and excessive information flow, to a time when fire and cooking with fire was at the core of our rituals," explained the team.

During their studies, designer Eduardo Gayotto, environmental engineer Plinio Ruschi and architect Pedro Heldt learned about the highly efficient rocket stove, which they adapted to create a versatile product with multiple functions.

"The goal was to design a product where a ragu, a feijoada, a pasta, a pizza, grilled vegetables and meat could be prepared," Gayotto added. "We wanted to break with the limitations of a standard barbecue."

Noori features on the longlist for the Dezeen Awards 2019, where it is joined in the Homeware design category by a chef's knife forged from a single piece of stainless steel, and a cooking pot that uses vacuum technology to keep food hot. 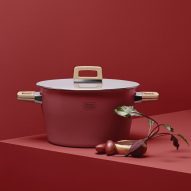 The stove's modular design was developed to avoid the need for an oversized fixed form. Instead, the product can be easily moved, stored and arranged depending on the requirement of a specific scenario.

A tripod with wheels provides the base for the stove, which can be moved and reconfigured using reclaimed-wood handles on either side of the main cylinder.

The burner is placed on the base and the L-shaped tube fitted inside with its opening aligned with a hole in the concrete shell. The cylinder sits on the burner module and half-moon grills rest on the opening at the top.

The stove can be used by placing pans or casseroles on the surface above the heat source. Alternatively, adding charcoal to the fire allows Noori to function as a barbecue grill.

An enamelled lid with a built-in temperature gauge can be placed over the grill and used to prepare smoked food. The addition of the lid along with a pizza stone transforms the rocket stove into a pizza oven, while the base unit can also be used as a fire pit for grilling.

The designers suggested that the product's simple appearance and ease of use is the result of a function-led approach, which prioritised durability, user health, experience, ergonomics and aesthetics.