New York firm SO-IL has envisioned a six-storey, concrete apartment building for León, Mexico, which is meant to offer an alternative solution for the country's low-cost housing shortage.

The project, called Las Americas, was conceived for central León, a fast-growing city in the central Mexican state of Guanajuato.

Designed by the Brooklyn-based firm SO-IL, the project is meant to offer affordable housing solutions for León and beyond. Specifically, it promotes infilling urban sites rather than building new developments on the city's outskirts, where services are limited.

For years, the government focused on creating suburbs with affordable, cookie-cutter houses. Many of these developments have since turned into slums, as reported by the LA Times.

"The city (León) is at a critical point in its growth to establish a new solution to the nation's housing crisis," the firm said in a project description. "How can we transform Mexican urbanisation from suburban banality to dense, thriving communities in the hearts of cities?"

SO-IL worked with a local housing agency, the Instituto Municipal de Vivienda de León (IMUVI), to develop a prototype scheme in which affordable homes are stacked atop each other, which it describes as "intra-urban vertical housing". Construction is slated to begin this year.

The 5,800-square-metre building will rise six levels and contain 56 apartments. The units will come with either one, two or three bedrooms.

The team worked with Mexican fabricators to develop a special concrete brick that is both inexpensive and easily to install. It also enables different facade patterns.

"The concrete unit reduces the construction time and cost and elevates the design potential of each individual home," the studio said. "The result is an irregular, playful facade reflecting the individual units in a unique, non-repeating pattern." 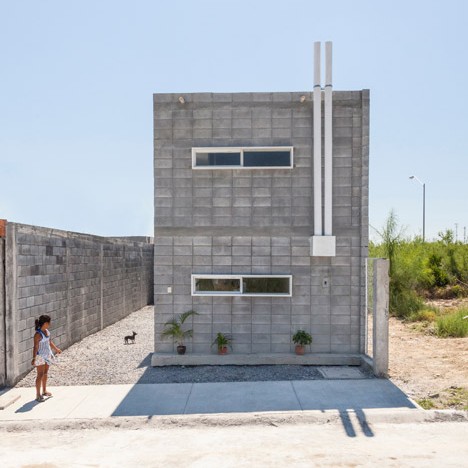 In plan, the building is shaped like a figure eight, with sculpted bars wrapped around two interior courtyards. Units are arrayed along exterior corridors that overlook the landscaped courtyards.

No two units face each other, providing a sense of privacy and ownership. Outdoor spaces will serve as points of interaction for neighbours.

"A collection of shared patios along a public staircase creates opportunities for community-building and offers the residents the ability to socialise and enjoy the outdoor space," the team said.

Within the apartments, the layouts were designed to support multi-generational living – so grandparents can watch children while parents are working. Natural cross-ventilation is expected to eliminate the need for mechanical cooling.

"It is critical to the success of this model that it can be employed with extremely limited means," the studio said.

The building was conceived in close collaboration with governmental entities, developers, mortgage providers and resident groups. The team hopes the prototype will be adopted beyond a single site in central León.

"The project uses limited resources to create a new urban living paradigm," the studio said. "It serves as a prototype for municipalities to pursue a similar approach and as a catalyst for urban regeneration and improvement of quality of life for low-income communities."

Mexico, like many countries, struggles to provide enough affordable housing for its growing communities. Other solutions proposed for the country include concrete-block houses by S-AR that are meant to be built by their owners, and a prototype dwelling by Communal Architecture Workshop that features a prefabricated, bamboo frame that can be quickly assembled.

Images are courtesy of SO-IL.