The Irthi Contemporary Crafts Council has paired Bedouin craftswomen in the UAE with international artists to create items that can be sold to a global market.

From its base in Sharjah – one of the seven Emirates that make up the United Arab Emirates – the Irthi Contemporary Crafts Council oversaw the creation of the collection to give local female makers the means to support themselves through their craft.

The collection consists of items made by collaborations between 12 international designers and studios to create 12 distinct product lines.

"We worked with around 40 artisans, Bedouin women living on the east coast of Sharjah, but they only know their craft. They don't really know anything about product design," said the Irthi Contemporary Crafts Council's curator Farah Nasri.

"We thought the best way to impart that knowledge is to really get designers on board and get them to share ideas and skills," she told Dezeen.

One of the collaborations saw American weaver Jennifer Zurick and the Emirati artisans apply the generations-old technique of safeefah – where palm leaves are woven together to create baskets and rugs – to a range of earthy-toned, bohemian handbags.

She brought this same principle to the Irthi project, where instead of palm fronds the bags are made from camel leather, held together by waxed linen threads, to give a more contemporary finish.

"We chose camel leather as it is locally and sustainably sourced. It is a by-product of the camel meat industry in the UAE, is chromium and metal-free, and biodegrades in four months," said Nasri.

A different collaboration reinterprets safeefah by dying the weave in purple and orange tones and using it to adorn sculptural totems which can be deconstructed to become a set of stools and tables.

The totems were handmade by Irthi's artisans, and designed by Barcelona ceramicist Pepa Reverter together with Dubai architect Abdallah Al Mulla, who brought his technical knowledge of creating large scale clay forms to the table.

The individual units that make up to totems are up to 60 centimetres wide and one metre high, "pushing the limits of clay design".

"It is very challenging to hand-build and fire pottery forms of this scale, as they tend to crack and warp," Nasri explained. 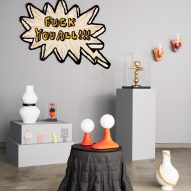 In supersized form, the massive, multicoloured orbs are emblazoned with Emirati door motifs such as the hand of fatima, and strung together by braided ropes to create sculptural homeware pieces.

Between three and eight metres long, they can be places on a dining tables, draped over furniture and architectural elements, or simply placed on the floor.

At the other end of the spectrum, the misbahs are turned into jewellery with threads and dainty spheres made from gold and silver. "Usually they consist of a closed loop of 33 beads. But here, they are split to have ten beads on one side and 23 on the other to create a more sculptural pattern." said Nasri.

For both variations on the theme, the stone craftsmen contributed their method for cutting marble, wood and semi-precious stones such as lapis lazuli into beads, as well as engraving and creating inlays. The Irthi artisans meanwhile used talli, a braiding technique similar to bobbin lace, to string the beads together.

The Emirati women also collaborated with designer Dima Srouji and a group of Palestinian glassblowers to create a line of abstract oud bottles and incense burners using the ancient Middle Eastern craft.

Their non-traditional, organic shapes reference the natural flora and fauna of the region, from spiky cacti to bulbous jellyfish.

The Emiratis also drew on the country's tradition of oud making to create a series of scents for the collection in collaboration with local parfumeries.

Among the other projects featured in the Irthi collection is another series of incense burners, this time cast in metal and created with UK-based designer Adi Toch. Meanwhile a selection of washi paper tapestries made in tandem with needlework artist Kazuhito Takadoi were embroidered using Japanese grass weaving techniques alongside safeefah.

Collaborations like this impart more than just practical skills, Nasri explained: "They give the Emirati artisans access to new sustainable markets and international platforms for exposure, while preserving and protecting the UAE’s cultural heritage for future generations."

Proceeds from the sale of the made-to-order pieces go partly to the Irthi artisans themselves as well as being reinvested into Irthi's range of programmes meant to empower women through craft across the Middle East, north Africa, south-east and central Asia.

This latest collection was presented as part of London Design Fair – where Sharjah was this year's guest country – and will go on a roadshow of Dubai and Milan Design Week over the next half a year.

Other notable projects presented at the Design Fair include a collection of un-Swedish design curated by Paola Bjäringer.