Curator Paola Bjäringer has put together a collection of "un-Swedish" design, which was displayed at the London Design Fair as part of the exhibition Crossovers by digital gallery Adorno.

The show featured pieces by eight different, predominantly female or non-white designers including Made By Us and Färg & Blanche, and brimmed with colour and pattern.

It was a deliberate contrast to the Design Fair's official Swedish Pavilion, which was dominated by the muted tones and minimalist design that is often associated with the country.

"I want to present the opposite of what is commonly known as Swedish design," Bjäringer told Dezeen.

"Sweden is known for things like gender equality and integration, but you never actually see that represented in its design. You very rarely see strong feminists objects."

The collection is one of 10 country-specific collections that were presented as part of the Crossovers exhibition, with the aim of showcasing up-and-coming artists and designers, and the styles and trends that are flourishing within their local scenes. 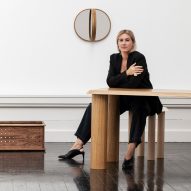 Bjäringer argues that what is popular in Sweden is changing:  "People have very clear associations with 'Swedishness' in their minds. We have probably been among the most efficient countries in the world at writing our own cultural reputation."

"But times have changed. Sweden has changed. Now there is a tension between a nostalgia for the past and new ideas and experiences of what it means to be Swedish," she continued.

"Young, bold designers are leading the way in slowly but surely creating a new identity."

Among them is visual artist Åsa Jungnelius, who shared a series of 10 phallic candleholders.

These were created specifically for Adorno out of rainbow coloured blown glass, complete with fluorescent pubic hair, and offer a tongue-in-cheek take on the politics of anatomy.

Their yonic equivalent, Snippa, is a pearlescent bowl reminiscent of a vagina by Jungelius which is meant for dipping or snacking.

"Most of the time, Swedish design takes itself very seriously," said Bjäringer. "So I wanted to bring in an element of humour."

She also chose to feature a series of mismatched totems from design studio Made by Us.

"They make funny, cute little sculptures or even big ones that just make you happy," said Bjäringer. "And because everything has to be sustainable in Sweden, no matter what you do, all the pieces are up-cycled."

In a similar vein The Baker's Lamp by design duo Färg & Blanche is a globe light held up by a bright orange blob-like form.

Meanwhile Fuck You All, a hand tufted rug-cum-tapestry courtesy of Maja Michaelsdotter Eriksson, rejects what the designer describes as Sweden's deference to the idea that silence is always golden.

To convey that the country's design approach can be not just rational but also deeply emotional, Bjäringer brought in product design graduate Simon Skinner and his series of Afropicks, consisting of eight afro hair combs of different shapes and sizes.

Each one is made to reflect the experience of what it means to be black or mixed-raced in Sweden and how this is tangled up in the social and political significance of hair.

Also represented are a series of constricted vases by Anna Kraitz, and Liquid Matter, an appliquéd quilt by textile designer Anna Nordström.

All pieces from the collection, and from the wider Crossovers exhibition, will be for sale on Adorno's website – a platform that Bjäringer explains is still missing for many Swedish designers.

"The objects in this collection are all classifiable as 'design-art', they're at the crossing of craft, functional art and design," said the curator.

"Back home, this type of design is relatively new and there is not yet a space for designers who are leaning more towards unique, hand-made pieces to express their ideas. I hope this collection has a part in encouraging the creation of such a space in Stockholm." 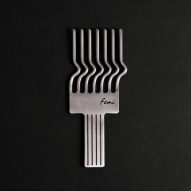 Speaking at Chart art fair earlier this month, Copenhagen-based designer Maria Bruun told Dezeen that Danish design is moving away from midcentury modern, with a growing appetite for contemporary design and the talent to execute it.

Other highlights include a miniature disco by Martino Gamper and a series of 23 masks by 23 designers at Seeds gallery.

Photography is by Tommy Frost.