Coloured skylights offer rainbow-hued illuminations on one side of this holiday cottage that Nina Edwards Anker has designed in Long Island, while the other is covered in cedar shingles.

The cedar shingles cover the curved, northern side of the property, which was designed to adhere to restrictions for the house to remain a 150-foot-radius (46-metre-radius) from wetlands and 35 foot (12 metres) from neighbouring properties. Large expanses run along the souther side offering views of the garden.

"The Long Island cottage is split in two: 'cocooned' into a soft opaque shape that provides privacy, and transparent and crystalline to allow for views onto an undisturbed landscape," said the studio.

Two huge rounded windows punctuate each end of the glazed side of the property, fronting the large open living area and the master bedroom. A single-storey glass wall runs in between to flank the hallway that connects these two end.

The coloured skylights are angled over the walkway to reflect light from the pool and cistern that wraps the rear of the house.

"The colours range from vermilion red, which signals sunset and rest, above the master bedroom, to deep yellow, which signals zenith and activity, nearest the living room," said the studio.

The skylights above the hallway of the bedroom wing are based on the way thay JM William Turner's 19th century paintings that depicted sunlight above water. Turner created his works according in response to a colour theory developed by German writer and politician Johann Wolfgang von Goethe that explored colour as a result of  perception, and not just light.

Inside, the wall facing the windows is white and left bare, apart from doorways and small windows, so that it provides a backdrop to the geometric patterns.

"It's meant to serve as a cinematic screen, its round shape abstracting the play of light and shadow, cocooning the interior like an ocean wave with light hitting its surface," the team added.

The interior decor is kept simple throughout, with white walls paired with wooden flooring. A curved white wall wraps one side of the open-plan kitchen, living and dining room, and is punctured with openings for a fireplace and log storage.

Edwards Anker designed most of the furnishings, which include coiled, rattan chairs, a geometric, monochrome chandelier, and a soft bean-bag-like sofa.

The dining table and chairs are curved white and glass, providing a nod to the aesthetic of the house. The kitchen is slotted behind here and fitted with white cabinetry to provide an almost seamless connection with the surrounding walls.

In one of the bedrooms, curving timber woodwork created as part of the building's structure is left exposed. A wooden ladder provides access to a mezzanine bedroom tucked into the roof, with wooden railings running along the front picking up on the structural details.

The master bedroom at the end of the property is complete with a white marble bathtub designed to fit in with the rounded walls. Black glass doors lead from here to the rest of the bathroom. Other details include a white desk with a huge dip that tapers into one of its leg. The table is paired with an angular seat that contrasts its rounded shape. 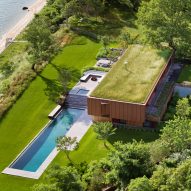 Cocoon House is an LEED-certified home and was created to align with Passivhaus principles. The northern, shingled-covered side supported by timber to form thick walls with a high thermal mass that retains heat and blocking humidity during warmer months.

Large expanses of south-facing glazing enables heating gain during winter months, with interior blinds providing shade during strong sunlight. Sliding glass doors also open up to allow for breeze from the ocean, which is then ecouraged to circulate by the curved walls. The pool at the rear, is also designed to gather and filter rainwater.

The house is built on wetlands, so is slightly elevated to allow for flooding in the case of an extreme weather event.

Edwards Anker is among many New Yorkers that have weekend and holiday getaways in Long Island. Other properties include a bayside residence with an infinity pool and a beachfront home topped with grass.

Photography is by Caylon Hackwith.