London design duo Studio Ayaskan has created a clock, which rakes sand in hypnotic, concentric circles to mark the passage of time.

The Sand project is a nod to Japanese rock gardens, called karesansui, in which sand is shaped into patterns to mimic the appearance of water rippling.

It consists of a circular, sand-filled platform and a single hour hand. In the daytime, from midnight to midday, it draws ripples in the sand.

Then, for the second half of the day, the hand flattens them out again in order to begin another cycle at midnight.

"In nature everything is cyclical," explains Begum Ayaskan, one of the twins behind the self-titled studio. "It's a way of timekeeping, through day and night, seasons and tides. We like to reflect on these subtle changes."

The circular pattern and its subsequent levelling is created through having the hour hand rotate, not just around the face of the clock but also around its own axis.

"It has grooves on one side and is smooth on the other to flatten the pattern out," Begum told Dezeen. "The hand is constantly rotating on its own axis, with a full rotation taking 24 hours to complete. During the 24 hours, the hand also makes two rotations around the clock face – one to draw the lines and one to erase them."

For the hour hand, the studio opted for wood and brass to match the brass bowl which holds the sand.

The clock is powered by customised electronics, plugged into an outlet.

"The central column contains the electronics, which are hidden under the brass platform," explains Bike Ayaskan, the design duo's other half. "The motor connects to the arm to create the rotational movement around the clock face and beveled gears move the arm around its own axis to create the two patterns."

Much like a Japanese rock garden, the sisters hope the clock will inspire a certain amount of introspection through its repetitive patterns.

"It is a meditation on temporality and permanence," said Bike. "It's about the need to maintain and take care of something every day, to redo it, as it gets undone. And through the meditative quality of these repetitive actions, it becomes a time for personal reflection." 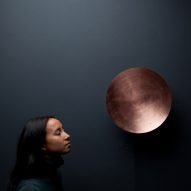 The Ayaskan sisters are originally from Istanbul and founded their design studio after graduating from London's Royal College of Art in 2015.

For their graduate show, they created a plant pot that expands with the size of its occupant.

Other unusual clock designs include one which uses perfume to tell the time and one created via a 12-hour long video performance by Dutch designer Maarten Baas.