Shane Davis and partners have overhauled an industrial building in Brooklyn's Gowanus area into a spot that functions as a vegan cafe by day, and a bar and restaurant, complete with a nightclub, after dark.

Located at the tip of the Gowanus Canal in Brooklyn, Public Records is the brainchild of musician Francis Harris and Shane Davis, who was the project's lead designer, and hospitality director Erik VanderWal.

Davis and the team renovated the historic brick building from 1912 to include three different venues: an all-day vegan eatery, an Audiofile record and cocktail bar, and a listening and performance space called The Sound Room.

The property was originally the headquarters for Brooklyn's American Society for the Prevention of Cruelty to Animals (ASPCA), and was later used by a church organ restoration company, a vintage guitar restoration shop and a retail space.

Much of the original structure was kept and upgraded with paint, including exposes pipes, pillars and ductwork.

"The history of the building was an inspiration," Davis said. "The atrium is historic and was left intact," he added." Everything is super DIY."

"The strategy was to leave as much of the original bones in tact while adding functional elements for sound attenuation," Davis continued.

In the main area, where there is the bar and restaurant, is an atrium-like space with cream walls and matching concrete pillars. The slender columns support the gabled glass roof and expansive ceilings, while glass doors next to a built-in bar bring in more natural light.

A record player is tucked to a side area, and is a home for "rare record collectors" to be featured nightly. Walls and parts of the ceiling are also covered with cream sound panels to improve acoustics.

Wood chairs, plywood tables, built-in booths with pale grey cushions, plants and linoleum ledges decorate the bar and dining space. Davis found the dining chairs in London at an antique store and had them recovered in black to match the room's speakers. 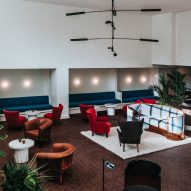 Guests are encouraged to enter Public Records' eating area via an outdoor walkway that passes through the garden, along a brick wall.

The project also contains a smaller nook closer to its street entrance that accommodates a coffee counter, while the back of the property forms the nightclub venue.

The site is complete with a gravelled courtyard for outdoor seating.

"We knocked down the bar to garden wall and built a steel and glass support system that connects the bar to the garden, and reoriented the entryway so that guests enter through our garden navigating through three very old existing trees," said Davis.

For the music space, called the Sound Room, interiors are dark and moody with perforated plywood panels cladding the walls for strong acoustics. The club is left bare and open for congregating and dancing.

"All gestures were made with sound immersion in mind and then how to make it beautiful in the process," Davis said.

In contrast with the bar and restaurant area, the Sound Room is almost completely new.

British company ARUP consulted on sound engineering, which included creating wooden walls that were cut on a CNC router according to a sound model. It is "a room within a room, to achieve the most refined acoustic environment possible," said Davis.

Other details in are a contoured ceiling, meant to diffuse sound, with lighting installed by Nitemind as well as an entry, coat check, restrooms and bar.

Davis and the team renovated the historic Brooklyn building in collaboration with the American Construction League and Space Exploration for documentation.

It forms part of a number of commercial outposts to set up shop in Brooklyn's industrial Gowanus neighbourhood in the past few years. Another spot nearby is Gowanus Inn by Savvy Studio, as well as the office of local architecture studio PRO led by Mirriam Peterson and Nathan Rich.

Photography is by Cody Guilfoyle.