Dezeen promotion: architect-led tours, open offices and a pumpkin carving competition are among the events that will take place in New York for the city's month-long architecture festival Archtober.

Organised by the Center for Architecture, the event offers tours, design lectures, parties, film screenings and more at venues across the city from 1 to 31 October.

Returning to the annual event is the Building of the Day series of architect-led walking tours, which comprise 29 buildings this year.

The set includes some of the New York's newest projects, like Studio Gang's Solar Carve Tower in the Meatpacking District, Hunters Point Library by Steven Holl Architects and the Statue of Liberty Museum by FXCollaborative, along with OMA's residential tower at 22nd Street and 10 Jay Street by ODA.

Architecture firms like Deborah Berke Partners, Diller Scofidio + Renfro, Ennead Architects and Thomas Phifer and Partners will also open up their offices for workplace tours, which take place every Wednesday. 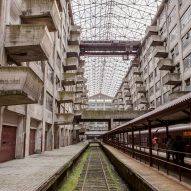 Several of New York's public libraries and museums are partners for Archtober, including the Museum of Modern Art, whose in-progress renovation work forms part of the event. The Austrian Cultural Forum New York, Brooklyn Botanic Garden and Cooper Hewitt Smithsonian Design Museum and among others joining the activities.

"We are excited for our growing network of partners, both institutional and professional, to be bolstered by the addition of NYC's library systems, allowing us to reach an even broader audience across the five boroughs," said Benjamin Prosky, executive director of AIA New York and the Center for Architecture.

New to this year's celebration is Weekend Getaway plans, with opportunities to explore architecture outside the city. Places include Philip Johnson's Glass House and Grace Farms by SANAA, both of which are in New Canaan, Connecticut. Art Omi art centre in Ghent, New York is also part of the offering.

"The festival will expand beyond the bounds of the city, highlighting some of the unique architecture of our region, just a short train or car ride away," Prosky said.

More new events for this year's festival are a nighttime tour of the city, family offerings, a Build a LEGO City day at AIA. Archtober wraps up with a Pumpkitecture contest, where 20 architecture firms carve pumpkins into architectural works to win a prize – a Pritzkerpumpkin.

A full list of events and learn additional information, visit the Archtober website to find out more.