The pop-up store is located at the heart of the SoHo neighbourhood and is the first physical retail space that Self-Portrait has opened in the United States.

Prior to this, pieces from the womenswear brand could only be purchased on its website, in its London flagship store or via high-end fashion retailers.

When it came to designing the New York pop-up, London-based Storey Studio wanted to take shoppers on a "journey of exploration, touch and discovery".

A "tactile labyrinth" of lace has therefore been created in the building's entryway, enveloping customers as they walk through to the shop floor.

"We wanted to create intrigue and anticipation from outside of the store," said Robert Storey, founder of the studio.

Thin sheets of pink and white lace have been hung at various lengths and arranged in a loose, concentric circle – lace panels in the innermost ring are the shortest in length, allowing visitors to pass easily underneath.

To maintain the arc-shape of the lace panels, each sheet is sewn to a curved metal rod. These are attached by tensile wires to huge timber frames that flank each side of the store.

Storey added that including the exposed and "unrefined" timber frame was an attempt to reject the "too polished, super-luxury" experience of New York and create an overall more approachable store entrance.

The installation was initially designed with only white lace, but a secondary pink layer was added to reference the Self-Portrait collection that was being displayed at the time of the pop-up's opening, which incorporated the exact same hue of the lacy material.

The studio was additionally hoping that using lace would capture the "femininity" of the brand's garments, which frequently feature sculptural frills, layered mesh and asymmetric cut-outs. 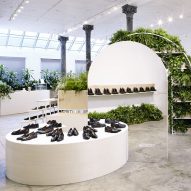 Colour-changing LED lights – which shift from pastel pink to yellow, orange and red – have also been incorporated to illuminate lace sheets. They hang from the ceiling in narrow tubes.

"We decided that introducing a new tone into the central layers would add more dimension and definition to the journey when looking from the outside in," Storey explained. 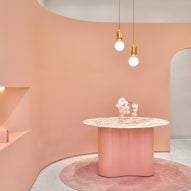 "The interaction the customer has when moving through the space is both a way to communicate the essence of the collection and to feel it 'on and off' their bodies in an artistic way."

After opening in August this year, the pop-up now accommodates the Self-Portrait's ready-to-wear Autumn Winter 2019 collection, including items of clothing exclusive to the New York location.

Limited edition stationery, water bottles and tote bags will also be available to buy until the store's closure in early December 2019.

The brand was founded in 2013 by Malaysian-born, Central Saint Martins graduate Han Chong, who has since become recognised for his experimental approach to texture and creating structural silhouettes.

Immersive retail spaces are common in the Storey Studio's portfolio. Its previous projects include a greenery-filled "shoe park" for fashion brand Everlane, which was designed in reference to the Barbican conservatory and a vibrantly coloured presentation space for Nike, which was lit up with LED strips.

Photography is by Jonathan Hökklo.