Tim Marlow has been named the next director and first chief executive of the Design Museum in London, after co-directors Deyan Sudjic and Alice Black announced their departure last week.

He will take on the role as of January 2020, leaving his current position as artistic director at the Royal Academy of Arts (RA). Until now the museum has not had a chief executive.

Marlow is a trained art historian, has presented documentaries on TV and radio for the BBC and was the founding editor of Tate magazine. 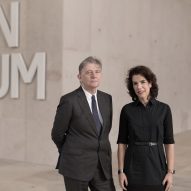 Deyan Sudjic and Alice Black to leave the Design Museum

"I'm both excited and honoured by the prospect of leading the Design Museum into the next chapter of its relatively brief but already illustrious history," said Marlow.

"The opportunity to build on the impressive work that the museum and its staff have already done in promoting the central importance of design and architecture in shaping our world is phenomenal."

Throughout Marlow's five-year tenure at the RA, he oversaw the institution's collections and exhibition programme. This includes 2015's Ai Weiwei show, a retrospective of Dali and Duchamp and this year's Antony Gormley presentation.

Before that, he was the director of exhibitions at the White Cube art gallery for more than 10 years.

Marlow's appointment follows the decision of Sudjic and Black to leave their position as co-directors after 12 years leading the direction of the Design Museum. Sudjic will stay on to become the museum's director emeritus.

During his 12-year collaboration with Black, the duo presided over the museum's move to its new John Pawson-designed home in 2016.

"The museum is riding high following the move to our new premises in Kensington," said the museum's chairman Lord Mandelson, "particularly after a series of successful exhibitions including the latest on Kubrick and with the anticipation of the forthcoming Moving to Mars exhibition."

"Design is central to Britain’s future story and Tim has the opportunity to make the museum a big part of how we move forward," he continued.