Design Museum co-directors Deyan Sudjic and Alice Black are leaving their posts at the London museum. A successor has been lined up and is expected to be named on Monday, Dezeen understands.

Sudjic and Black will step down in January 2020 after working together for 12 years, with Sudjic becoming director emeritus.

The museum appointed headhunters earlier this summer to recruit for a replacement, which will combine the roles of chief executive and director. Until now the museum has not had a chief executive.

The new chief executive and director is expected to be announced on Monday.

Sudjic and Black oversaw the Design Museum's 2016 move from its premises in Shad Thames to its new home in the former Commonwealth Institute on Kensington High Street.

Sudjic was appointed director in 2006 and devised the strategy for the Design Museum's expansion that would offer free admission for the first time. Black joined as deputy director in 2007 to lead the move to the institution's new premises.

Black became co-director of the museum a month after the move into the John Pawson and OMA-designed building was completed in 2016.

"Having established the Design Museum in its new home, after record visitors this year, I am now ready for a new challenge," said Black.

"We have shown that design can change the world, and that the Design Museum has changed design. Now I want to see where design is going next," added Sudjic.

The new premises have allowed the museum to grow its annual visitor number dramatically, from 120,000 per year to 600,000 annually. Since the Design Museum relocated it has had 1.9 million visitors.

Earlier this year Sudjic curated an exhibition of the work of legendary film maker Stanley Kubrick, which was the most significant in the museum's history.

"Moving the Design Museum to Kensington is the most significant moment of my whole career in design because it allowed all my early dreams and ambitions to come true," added Terence Conran, the Design Museum's founder. 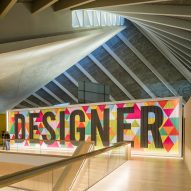 "We have created a world class museum with the size and scope for the serious promotion and celebration of design and architecture in this country," he added.

"I am eternally grateful to Deyan and Alice for their outstanding work in leading and realising this vision and for the three successful years we have enjoyed in our museum’s new iconic home. They have created the robust foundations that will ensure the Design Museum continues to promote the importance of design to our country for decades to come."

Sudjic is a British design writer who was one of the co-founders of monthly magazine Blueprint, former editor of Domus and the former design and architecture critic for The Observer newspaper.

While at the Design museum he established Designs of the Year awards in 2007, with the Yves Behar-designed One Laptop Per Child project taking the first overall prize in 2008. In an interview with Dezeen in 2017, Sudjic said that it was a "a howling error" that the iPhone didn't win the inaugural prize.

Photography is by Phil Sharp.