French designer Marlène Huissoud asks humans to "Please Stand By" with her first chairs, which are designed to be refuges for insects.

Called Please Stand By, the project comprises a series of chairs, or "hotels", for pollinators such as solitary bees, wasps and butterflies.

Each sculptural object has been made from a combination of nature-friendly materials such as unfired clay, natural binders and wood, and is perforated with holes that measure five to 10 centimetres deep to host the insects.

According to the designer, a recent global scientific review of insect populations showed that more than 40 per cent of insect species are declining, a third are endangered, and the total mass of insects is declining by 2.5 per cent each year.

Huissoud aims to give back to nature by creating these habitats for London's wildlife, offering insects a place to take refuge, to nest and to hibernate within the city.

"We have been selfish," said Huissoud. "We all have used resources of our dear planet. But it is not a time to cry, it is a time to act."

"As a designer it is important to design a chair at some point in your career, and I liked the idea of dedicating my first chair to insects and not humans, asking humans to 'Please Stand By' and look at nature and wildlife in general with a new eye," she added.

Created with the help of Robert Francis and Mak Brandon, scientists from King's College London, the insect chairs were designed and made in an organic and sustainable way using materials favoured by insects. 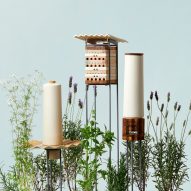 Each of the sculptural pieces have been made from natural clay that has been left un-fired in a bid to keep it as "primitive as possible", before being coated with a natural binder to protect them from the weather.

Huissoud and the scientists opted for colours that insects are naturally attracted to, which include light hues like white and grey as well as some dark tones.

The chairs were exhibited at the Thurloe Square Garden near the V&A museum in South Kensington during this year's London Design Festival, which took place between 14 and 22 September.

The pieces have now been returned to Huissoud's studio in Paris with the designer now keen to find them a permanent home.

"It is important for me that these pieces are going to museums and institutions for their gardens to open a dialogue with the public," said Huissoud. "These sculptural pieces are encouraging biodiversity in the gardens and increase the ecosystem productivity."

In a similar project, Mexico-based creative studio MaliArts designed a group of three structures for solitary bees living in built-up areas, including a shelter, a feeder and a waterer.

Each of the Refugio amenities aim to generate a closer relationship between human-centric cities and nature.