Photographer Arjan Bronkhorst has created a book that aims to expose under-the-radar projects by revered Dutch architect Gerrit Rietveld. Dezeen has picked out seven of the most intriguing.

Spanning over 500 pages, Gerrit Rietveld: Wealth of Sobriety gives a close insight into 20 residential projects completed by the Dutch architect.

Rietveld, who was born in Utrecht in 1888, is best known for his UNESCO-listed Schroder House. However, throughout the course of his career, the architect completed close to 100 homes which haven't seen as much media attention.

This encouraged photographer Arjan Bronkhorst to document the lesser-known properties. Visiting 65 homes over a period of two years, he eventually whittled down a selection of 20 to appear in the book, selecting properties which he felt most acutely reflected Rietveld's architectural style. 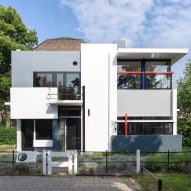 "Rietveld is known internationally for two things: the Schröder House and the Red Blue chair – but there's so much more from his hands that's worth seeing," Bronkhorst told Dezeen.

"He [Rietveld] does not have the status of Le Corbusier or Van der Rohe, but when you regard his creative mastermind he's at least their equal," he continued. "Perhaps it's time to revaluate his oeuvre."

Each project has a dedicated chapter, which gives a written overview of Rietveld's design process, standout decor features and significant alterations that have been made over the years. This is followed by a series of colour images that capture the home and, in some cases, its current owners.

Several of the interior photos also capture the simple and functionality-focused aesthetic of Rietveld, who once claimed that people should "find joy in the wealth of sobriety" – a quote that became the book's name.

Dezeen has picked out seven striking projects from the title – read on to find out more.

Rietveld extended an existing garage to create this two-bedroom apartment for a chauffeur and his family.

Assembled in just three weeks, the property is an early example of the architect's experimentation with prefabrication building techniques – each of the three-by-one metre concrete blocks that clad the facade was made and painted with white dots in a factory, before being transported to site.

Planning committees initially rejected Rietveld's designs for this house, which failed to comply with the "quasi-rustic" architectural style of neighbouring buildings.

When construction was finally able to start in 1934, the house was built with a series of boxy white volumes and a semi-circular extension.

On its first floor is a large study where its first owner – children's author AD Hildebrand – would escape to write his books, with views of the greenery-lined garden path.

Described by Rietveld as "the result of dozens of years of experimentation", Van den Doel House originally comprised of three rectilinear volumes which were each fronted with glazed bricks.

Although the house's translucent facade has been ruined over time – the bricks cracked whenever temperatures dropped below zero – its most recent owners have worked to repaint the interior in colours that Rietveld would have initially used.

Other original features still on site include a two-metre-wide fireplace in the living room.

An unassuming dirt road lined with leafy trees leads up to Parkhurst House, the only residence that Rietveld designed outside of the Netherlands.

The architect was never able to physically visit the property – he was refused entry to the US on allegations of being a communist sympathiser – but instead posted his design proposals to the home's original owner, Charles Parkhurst.

Described by Parkhurst as a "three-dimensional Mondrian painting", the home features floor-to-ceiling gridded windows that offer views of a nearby river, blocks of red and yellow paint on its facade and a subtly angled roof.

Designed by Rietveld to be in "complete harmony with the surrounding landscape", the exterior of the house is clad with dark-green timber planks.

Inside are a handful of quirky features that helped counter the fact the house initially had no gas, water or electricity supply – including a trap door in the floor through which bottles could be lowered into the water and kept cool.

These quaint holiday cottages were originally commissioned by a pair of industrial manufacturers that wanted employees to have a place to get away and relax.

Asked to keep construction costs to a minimum, Rietveld worked to squeeze as many comforts and facilities as possible into the guesthouses – one of which measures just 33-square metres.

Space-saving details included beds that fold down from the wall and a coffee table that could be used to seat extra guests at dinner time.

While a majority of Rietveld's architectural canon consists of private homes, he had a deep interest in improving living standards for the working class.

In the early 1950s – amidst a housing shortage in the Netherlands – the architect was called upon to create Robijnhof accommodation block.

He was meticulous about the building's external appearance: windows were fitted with fluted glass to prevent inhabitants from hanging their own choice of curtains and open-air areas were created for drying clothes so that balconies weren't spoiled by hanging laundry.