Dezeen has been shortlisted for seven awards at three different awards programmes for excellence in journalism, publishing and live events.

Two of the awards are for Dezeen Awards, which launched last year. Three are for Dezeen itself, in categories that reward the best publishers, editorial teams and brands of the year.

Dezeen's acting editor Tom Ravenscroft and founder and editor-in-chief Marcus Fairs are both up for individual awards.

Ravenscroft is shortlisted in the Architecture Writer of the Year category at the IBP Journalism Awards. Dezeen is up for Editorial Brand of the Year at the same ceremony, which is being held in London on 28 November. 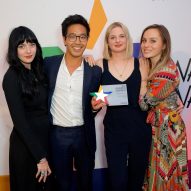 Fairs is on the shortlist for digital editor of the year at the British Society of Magazine Editors (BSME) awards. The ceremony is on 17 November.

We are up for four separate awards at the PPA Independent Publisher Awards, which are due to be announced at a ceremony in London on 8 November.

Dezeen Awards, our architecture, interiors and design awards programme, is shortlisted for Launch of the Year and Event of the Year. Earlier this year Dezeen Awards was named Best New Awards Event at the Awards Awards. Yes really! There is an Awards Awards!

Dezeen has won dozens of awards over the years, including a People's Voice Webby award in 2015, and five different accolades at the prestigious Association of Online Publishers awards.

Our editors have won BSME awards three separate times and our video studio was named Best Content Studio at the Digiday Awards in New York City in 2015.