Everlane has launched a collection of sweaters made from repurposed cashmere, a move the US clothing brand claims halves the carbon footprint in comparison to traditional garments.

Everlane teamed up with Millefili mill in Prato, Italy, which specialises in up-cycling cashmere wool and other clothing materials, to make the ReCashmere sweaters with a blend of recycled cashmere and virgin wool.

The mill collects worn sweaters through a recycling programme, and sorts and chooses colours that can be combed into new yarns to "give cashmere a second life".

The selected yarns are then blended with extra-fine, virgin merino wool to create the garments. The merino portion is added to give the textile strength and durability, according to the company.

The mill also conducted a life-cycle assessment of ReCashmere to measure the environmental impact of a product's life – from manufacturing to repairs and recycling.

It found that recycled cashmere sweater has "a 50 per cent smaller carbon footprint than traditional cashmere".

Following Everlane's releases like Tread sneakers, which it claims are the "world's most sustainable sneakers", and its plans to stop using virgin plastic by 2021, the brand developed its ReCashmere in a bid to find a more environmentally friendly and sustainable way to produce cashmere wears.

Cashmere is produced from goats' hair, while merino is made from sheep's wool. Cashmere has a much larger environmental impact because it typically requires four goats to make enough wool for one sweater, while the wool of one sheep can be enough for five garments.

An increase in the demand for cashmere products in recent years has called for farmers to increase the size of their herds of goats. 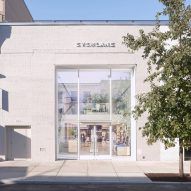 This has had a detrimental effect on grasslands, particularly in Mongolia where the animals are commonly raised, with goats pulling up grass from its roots and piercing the ground with their hooves.

ReCashmere comes in different clothing cuts and styles, including crew neck and v-neck sweaters, as well as a women's button-up and cardigan.

Colours range from cream, black, tan, light and dark blue, green, yellow, peach and maroon. Despite their blended composition of recycled and virgin wool threads, all of the pieces are unicolour.

Everlane was founded in 2010 by Michael Preysman and Jesse Farmer, and has stores in New York City and San Francisco. The brand aims to counteract fast-fashion by offering quality basics while being transparent in its sourcing and pricing models.

It is among a number of new fashion companies that are designing clothing and consumer models to be more sustainable.

Examples include the Pangaia T-shirt made from a lightweight seaweed fibre and Mud Jeans, which is composed of between 23 and 40 per cent recycled denim.