Stefano Boeri has unveiled the design of a circular elevated walkway that will be built below Renzo Piano's replacement for the collapsed Morandi Bridge in Genoa, Italy.

Developed by his eponymous studio Stefano Boeri Architetti, working with Metrogramma and Inside Outside, the walkway forms part of the Polcevera Park and The Red Circle masterplan, which has been designed to "breathe new life" into the landscape that is recovering from the Morandi Bridge collapse in 2018.

The masterplan will overhaul the site below Piano's replacement structure, with a circular red walkway elevated above biodiverse parkland and a "sustainable innovation" zone.

"The Polcevera Park and The Red Circle has been thought out as a system of parks with different ecologies and infrastructures," explained Stefano Boeri Architetti.

"For sustainable mobility and smart buildings for R&D, and manufacturing with the aim of reversing the current image of the Polcevera valley from a complex and tragically devastated place to a territory of sustainable innovation for the rejuvenation of Genoa itself."

At the heart of the Polcevera Park and The Red Circle, the giant walkway will create a circular "corridor" for bikes and pedestrians to move easily between the parks and buildings.

It will measure 1,570 metres in length with a radius of 250 metres, and will be built from steel as a reference to the "powerful local tradition of blast furnaces, cranes, and overhead cranes".

The walkway will be marked in the city by a 120-metre-high wind tower, which will be used to generate green energy that will be distributed to the buildings in the area.

Below it will be the Polcevera park, which will be divided up into a number "linear fields" that will align with the bridge's support columns.

These fields will vary from 7 to 20 metres in length and each contain a different combination of plants and tree species to increase biodiversity in the area. They will also be developed to absorb and collect rainwater for irrigation.

It is hoped that this parkland will also provide the city with a variety of spaces animals as well as social and recreational activities for locals. A zigzagging ramp running perpendicular to the fields will connect them to the circular walkway. 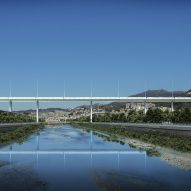 At the heart of the Polcevera park the studio's are also incorporating a forest-like installation named Genova in the Wood by artist Luca Vitone, which will feature 43 trees in memory of the victims of the bridge collapse.

This will also incorporate a number of benches with "peculiar shapes", such as wheels and crosses, designed to double as peaceful reading nooks amongst the trees.

The Polcevera Park and The Red Circle masterplan will be complete with clusters of industrial buildings around the edges of the park, which are being designed by Metrogramma Milano.

These buildings are hoped to form a sustainable innovation hub for the city.

Each building will cater for a variety of different functions and will be directly connected to its neighbours via the red elevated walkway that will run through each structure.

Metrogramma Milano said all new building will be blue as a reference to the Mediterranean Sea, and will be built with sustainable materials with large flat roofs to accommodate solar panels and other renewable energy sources.

The development of the masterplan will run alongside the construction of the new motorway bridge designed by Italian architect Piano, which he revealed just four months after the collapse of Morandi bridge.

Described by Piano as "a very Genoese bridge," his replacement will take the form of a minimalist white beam supported at regular intervals by tall piers.

Elsewhere in Italy, OMA is working with Laboratorio Permanente to develop the Agenti Climatici masterplan in Milan, which will see two abandoned goods yards transformed into public parks to filter the city's air and water pollution.

Images courtesy of Stefano Boeri Architetti, Metrogramma Milano and Inside Outside.