Located in a Soviet-era warehouse on the left bank of the Dneiper river that runs through the Ukrainian capital, the 300-square-metre Dicentra store was previously used as a workshop.

Locally based Rina Lovko Studio was tasked with transforming it into a retail space for the wholesale flower supplier on a tight budget.

The linear space now includes a reception area, a workbench for florists, utility rooms with a kitchen and a shared toilet for guests and staff.

Textured walls and floors that run throughout have been made to appear unfinished. The original asphalt floor was covered with concrete, while white and green paint was stripped from the walls along with the plaster. They were finished with a glazed coating.

"The idea was to make everything look untouched," said the studio, "as if we had come, put down furniture and the store started working."

A private office for managers takes the form of a mirror-clad cube that sits at the far end of the room, its sides not quite reaching the walls to make the surrounding space appear larger and even longer.

Bespoke stainless-steel workstations dotted across the office are lined with grey terrazzo and finished with corners cut at 45 degrees.

"We previously developed a table for the Dicentra store in Lviv," explained the studio. "It was made to the same design, but in different materials."

The table is double-sided to allow for integrated drawers and bins. It's also mounted on wheels so it can be easily moved around.

"Above the table is a lamp with a diffuser for comfortable work and on the other side a mirror so that florists, in the process of working, can see bouquets from the side," said the studio.

White-wire outdoor tables and chairs have otherwise been used to furnish the space, along with potted plants. The studio also developed mobile shelving-units made from perforated stainless-steel which can transport batches of flowers.

"Flowers are always different, so the shelves were made with special milling, which allows you to quickly change the height of the mount," the studio added.

A timber-panelled wall at the periphery of the store is inset with two refrigerators – one is fronted by glass to showcase flowers to customers, while the other is used to store cut plants for wholesale clients.

Both are made of special thermal materials and equipped with sliding doors and motion sensors. 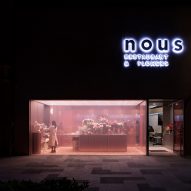 "Aluminum was chosen so that the refrigerator would fulfil its task – to keep the flowers cold," said the studio.

"Inside, the refrigerators are painted in a graphite colour. This decision is due to the product: flowers on a black background look bright and in contrast, which is good for sales. We supported this with lighting that made the flowers looked even brighter."

The store's angled entrance door has been made from red mesh and completed with neon signage, helping it stand out against the neighbouring industrial buildings and draw customers in.

Other minimal florists featured on Dezeen include a store in Japan that features a curved black climbing frame for plants and another in Russia that boasts a sci-fi ceiling inspired by Stanley Kubrick's film 2001: A Space Odyssey.

Photography is by Alexey Yanchenkov.