Future Facility, which is a division of Sam Hecht and Kim Colin's Industrial Facility studio, worked with Swiss "bottleless drink company" Lang to develop the product in response to sustainability issues associated with bottled water.

The design aims to translate a complex industrialised system into an easy-to-use countertop product that is simply plugged in without the need to connect to a water outlet.

The device replicates the flavour and health benefits of natural Alpine mineral water, which contains a particular balance of minerals and salts that are typically removed in the process of filtering tap water for drinking.

A filtration system in the product uses reverse osmosis to remove harmful pollutants and odours from the water, before a formula of minerals and salts is added to replace what may have been lost.

The overall mass of the system is broken up into three segments, with the round jugs featuring a crease that forms a spout.

Hecht described the resulting form as a "squircle" and claimed that the flowing lines of the three adjoining elements "make it appear like a ribbon of paper".

An opaque jug on one side is filled with tap water, which is then filtered, remineralised and reemerges from a spout to fill a transparent jug on the opposite side. A simple control panel used to select hot or cold water is located at the centre. 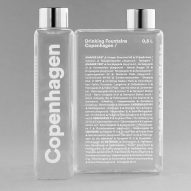 "Since the machine is holding a lot of technology, the design deliberately tries to visualise the system so that it is simple to understand," Hecht told Dezeen.

"There's a lot going on inside so the main thing was to make sure that design didn't get in the way – that simplicity of use was first and foremost."

The volume of single-use plastic bottles currently being produced has become a topic of concern for designers as well as politicians and organisations promoting sustainability.

Steps currently being undertaken include a scheme in Rome that offers free rides on the city's public transport system in return for recycling bottles.

A reusable water bottle that cleans itself using UV light is shortlisted in the Dezeen Awards 2019, while Italian designer Emanule Pizzolorusso has created refillable bottles that list the locations of public water fountains on the outside.

The makers claim that the device provides mineralised water for less than €0.10 per litre, while reducing the need for disposable bottles, single-use packaging and global transportation.

Each product is accompanied by Langpak cartridges that provide the option of hot drinks and flavoured water. These flavour packs use natural extracts to create beverages such as green tea or black tea, as well as flavoured cold drinks.

The water filters, which only need to be changed around every two years, are situated at the rear of the machine, and the unit's flat top surface can be used to store mugs or glasses.

Following a period of testing, in which the company sold out of its test series, the Lang drinks system is production ready and is preparing for an imminent launch.

Hecht and Colin established Future Facility in 2016 to work on a variety of future-focused projects that deal with our relationship with technology through the application of product design, engineering and user experience design.

The studio operates alongside Industrial Facility, which was founded in 2002 and is known for its utilitarian and considered approach to designing everyday products.

Previous projects include a range of tables and chairs based on canteen tables and park benches, as well as a collection of lamps that incorporate outlets for charging electronic devices.